The Titans have snagged a veteran defensive lineman off a division rival’s practice squad. The team announced that they’ve signed Mario Edwards Jr. off the Jaguars’ practice squad and on to their 53-man roster. To make room, the Titans waived linebacker Derrek Tuszka.

Edwards has never lived up to his second-round billing, but the defensive lineman has still seen time in 86 games across seven professional seasons. The veteran spent the previous two seasons with the Bears, collecting six sacks despite only starting one of his 27 appearances. He was released by Chicago at the end of the preseason and subsequently joined Jacksonville’s practice squad.

The 28-year-old won’t knock Jeffery Simmons out of the starting defensive tackle spot, but he’ll provide some additional pass-rushing prowess along the defensive line. His ability to play defensive end could also help him see some defensive snaps.

Tuszka was claimed off waivers from the Steelers in early September, and after being inactive through the first two weeks, he earned a start on Sunday with Bud Dupree and Ola Adeniyi sidelined.

SEPTEMBER 2: The Titans placed Landry on IR Friday and claimed Derrek Tuszka off waivers from the Steelers. A former Broncos seventh-round pick in 2020, Tuszka spent last season with the Steelers. He worked as a backup and notched two sacks in his Pittsburgh debut. The Steelers, who since traded for frequent Broncos fill-in starter Malik Reed this week, waived Tuszka on Thursday.

SEPTEMBER 1: Months after re-signing with the Titans, Harold Landry does not look like he will suit up for the team this season. The veteran edge rusher went down with a torn ACL in practice, Adam Schefter of ESPN.com tweets. 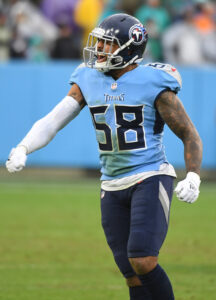 Landry sustained the injury Wednesday. This is obviously a crushing blow for the Titans, who have relied on Landry as their top outside linebacker for years.

Tennessee has gone through extensive efforts to fortify its edge-rushing corps under GM Jon Robinson, but several of the moves have not worked out. Landry, however, has helped the team get by. After putting together a strong contract year (12 sacks, 22 QB hits) — one that finished with the Boston College product recording 1.5 of the Titans’ nine sacks of Joe Burrow in their divisional-round loss — Landry signed a five-year, $87.5MM extension in March.

Both of the Titans’ top outside ‘backers have now sustained ACL tears as pros. Bud Dupree, who signed with Tennessee on a five-year deal worth $82.5MM in March 2021, was coming off a late-season ACL setback when he arrived in Nashville. Wednesday’s development hijacks the Titans’ plans to pair Landry with what could be a better Dupree version this season.

This 11th-hour injury certainly illustrates the importance of guaranteed money. The Titans passed on franchise-tagging Landry but managed to hammer out a deal with the former second-round pick to keep him off the market. Landry, 26, received $35.25MM guaranteed at signing.

Chosen 41st overall in 2018, Landry has 31 career sacks and is coming off his first Pro Bowl. He has helped the Titans withstand the likes of Jadeveon Clowney, Vic Beasley and Cameron Wake being free agency disappointments over the past three seasons. Dupree, 29, also has yet to deliver on the contract he signed, recording just three sacks and eight QB hits in his first season post-ACL tear. The Kentucky alum also missed six games, despite starting the season on time after his rehab effort. The team will need more from the former first-round Steelers draftee this season.

This has not been the smoothest Titans offseason. The team said goodbye to its top wide receiver — A.J. Brown — after early extension talks revealed a substantial gap between the parties, and first-round wideout Treylon Burks has not proven to be a plug-and-play replacement. Of course, it is still early for the Arkansas product. But, with Robert Woods coming off a November ACL tear, Burks’ readiness is fairly important for a Titans team that survived a spate of injuries to book the AFC’s No. 1 seed last season.

The Titans are also thin on edge defenders beyond their starters, rostering 2021 fourth-rounder Rashad Weaver (12 defensive snaps last season) and former UDFA Ola Adeniyi (2.5 sacks in 2021 as a rotational cog) as backups. Several veteran edges — from Melvin Ingram to Justin Houston to Carlos Dunlap to Trey Flowers — came off the free agency board over the past several weeks. Jason Pierre-Paul remains available, as does Everson Griffen. JPP is coming off a down season, however, and Griffen is 34. Ex-Beasley Falcons teammate Takk McKinley, 26, is available as well. The former first-rounder took multiple visits this summer, but he is coming off a late-season Achilles tear.

An ugly night for the Steelers has gotten even worse. The Steelers are trailing the Vikings by a significant margin on Thursday Night Football, and the team will have to finish the game without their best player. The team announced that linebacker T.J. Watt has been ruled out for the game with a groin injury. Watt was previously labeled with a questionable tag after exiting the game in the second quarter.

Watt had a tackle and a QB hit before exiting tonight’s contest. In his 10 previous games this season, the 27-year-old had collected a league-leading 16 sacks and 16 tackles for loss. Watt also has 47 total tackles, 26 QB hits, and four forced fumbles.

The linebacker previously missed a pair of games this season thanks to separate hip and knee injuries, and he had to exit an additional two games due to injury. He also spent a week out of practice after being placed on the reserve/COVID-19 list. Prior to this season, Watt had only missed a pair of regular season games in four seasons.

The Steelers are lacking linebacker depth at the moment, leaving Derrek Tuszka as the only option to replace Watt in the lineup. The former seventh-round pick has seen time in 10 games for Pittsburgh this season, collecting nine tackles. The 25-year-old has seen an uptick in snaps over the past few weeks, averaging 20.75 defensive plays per game between Week 10 and Week 13.

During an appearance on HBO’s The Shop: Uninterrupted, Buccaneers quarterback Tom Brady discussed his reactions to a potential 2020 free agent suitor pulling out of the sweepstakes to stick with their incumbent signal-caller.

“There was a story, in free agency, one of the teams, they were interested and all of sudden they weren’t interested at the very end,” Brady said. “I was sitting there thinking, you’re stick with that [expletive]? Are you serious?

There’s been plenty of speculation about the mystery team and quarterback that Brady was referring to, and Mike Florio of ProFootballTalk.com cites multiple league sources who believe the future Hall of Famer was referring to the Raiders and Derek Carr. Las Vegas had been mentioned as a potential Brady suitor during the 2020 offseason, but the organization dropped out of the sweepstakes after balking at Brady’s long list of requests. As Florio notes, Brady had his chance at payback last season, when he tossed four touchdowns in a 45-20 Tampa Bay victory over Las Vegas.

Unless Brady unexpectedly reveals who he was talking about, we’ll never truly know if it was the Raiders. Plenty of other teams and quarterbacks have been mentioned, including the Bears/Mitch Trubisky and the Titans/Ryan Tannehill. The 49ers and former teammate Jimmy Garoppolo have been a popular suggestion, but considering Brady’s lifelong affinity for San Francisco (and his declaration that he was never going to sign with that team in the first place), we can probably cross them off the list.

Here’s more out of the AFC West…