49ers’ offensive tackle Mike McGlinchey is set to play through the fifth-year option of his rookie contact this season. McGlinchey has been a bit of a mixed-bag for the Niners early on in his career. While grading out as one of the league’s better run-blockers, McGlinchey struggled early in pass protection. Just as he was beginning to show some real improvement in the passing game, McGlinchey saw his season come to an end in Week 9 of this past season after suffering a torn quadriceps.

While McGlinchey’s cap hit for 2022 will be $10.88MM, the 49ers have nothing to gain by cutting him, as the fifth-year option for a rookie is fully guaranteed. The team does hold two options to potentially avoid the 27-year-old’s cap hit: they can trade him or extend him. According to Eric Branch of the San Francisco Chronicle, there is a chance that the 49ers sign McGlinchey to an extension in order to create more cap space. They would be betting on McGlinchey coming back strong from his injury, but they seem to feel good about the progress in play he showed before his injury last year.

Here are a few other notes from the NFC West, starting with a note from Seattle:

The Rams have signed linebacker Jachai Polite to the practice squad, per a club announcement. This marks the third deal of Polite’s career, even though he was a 2019 third-round pick of the Jets. 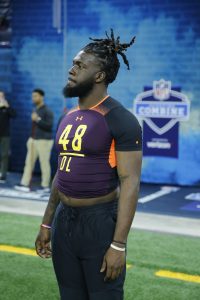 The Jets shocked the world when they cut Polite this summer, but he has done little to prove his critics in New York wrong. He went unclaimed on waivers and did not land a 53-man roster deal after his release. Instead, he hooked on with the Seahawks’ taxi squad and lasted all of three weeks. Now, he’ll try his hand with another NFC West club.

If all goes well for Polite, he could have an opportunity to face one of his former clubs when the Rams play the Seahawks on Oct. 3. In the meantime, the players on the Rams’ 46-man active roster will be tasked with the Bucs this weekend.

The Jets took a lot of heat for cutting third-round rookie Jachai Polite before the start of the season. They’re not looking quite as foolish now. On Monday, the Seahawks released the pass rusher from the practice squad. 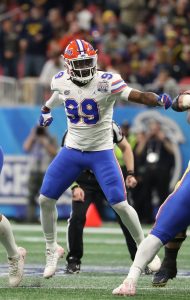 Polite, who racked up eleven sacks during his final season at the University of Florida, went unclaimed after the Jets cut him in late August. His natural ability is undeniable, but his overall maturity has been questioned. It’s possible that his penchant for tardiness reared itself again in Seattle, pushing him out of the picture.

Polite’s rudeness resulted in $100K in fines during his short time with the Jets. Despite all the hiccups, it stands to reason that he’ll get another taxi squad opportunity soon.

This is interesting – the Jets have listed No. 3 overall pick Quinnen Williams as a second-stringer on their first depth chart of the season. Of course, pre-season depth charts don’t mean a ton in and of themselves, but it is notable that Williams is slated to back up Steve McLendon at defensive tackle in Week 1. Things can also change between now and Sunday when the Jets face the Bills.

As we get set for the season to begin, here’s more from the AFC East: