The Browns are cutting Davion Davis (Twitter link via NFL.com’s Ian Rapoport). The wide receiver was set to return from a two-game suspension this week, but he’ll hit the waiver wire instead. 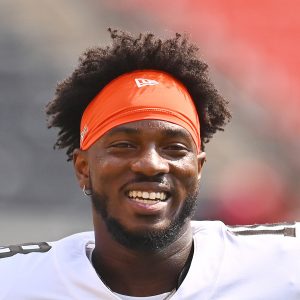 The move is a bit surprising on multiple fronts. For starters, Davis led the team in receiving this preseason, showing some promise for the year ahead. Meanwhile, star receiver Jarvis Landry is week-to-week with a knee injury. Davis seemed to be a shoe-in for the 53-man roster, but the Browns have other plans.

Davis should draw interest from other clubs on the waiver wire, especially since he comes with a low-cost contract. Meanwhile, this could be a promising sign for Odell Beckham Jr. OBJ has yet to play this season, but the release of Davis might mean that he’s on the verge of making his 2021 debut.

Clubs will have 24 hours to claim Davis once he reaches the waiver wire. If he goes unclaimed, he’ll be a full-fledged free agent and able to sign with any team.