The Seahawks are making sure their long snapper sticks around a while longer. Seattle is extending Tyler Ott, they announced on Twitter. 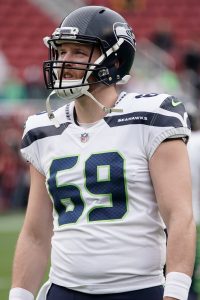 Terms of the deal weren’t immediately disclosed, but the team’s announcement said it was a “multi-year” contract. An undrafted free agent from Harvard, Ott originally signed with the Patriots back in 2014. He never made the 53-man roster and after a brief stint with the Rams, he landed with the Giants. After a short stay in New York and another one with the Bengals, he finally settled in Seattle.

He’s snapped in all 16 games for the Seahawks each of the past two seasons. As Bob Condotta of The Seattle Times pointed out in a tweet, Ott would’ve been a restricted free agent after this season prior to this extension. Seattle should have a solid special teams unit for years to come with Ott, punter Michael Dickson, and kicker Jason Myers all in the fold.

The Bengals have activated running back Cedric Peerman from the injured reserve, reports Jim Owczarski of the Cincinnati Inquirer (via Twitter). The team has also promoted long snapper Tyler Ott to the active roster. To make room, the team has waived defensive tackle DeShawn Williams.

The Peerman news isn’t much of a surprise, as the Bengals designated the running back as their player to return from the injured reserve. The veteran fractured his left arm during the preseason, shelving him for the first three months of the season.

The former Pro Bowler will make an instant impact on the Bengals’ struggling special teams unit, and he’ll also provide some depth to a running back corps that recently lost Giovani Bernard for the season. Of course, it’s unlikely the 30-year-old sees any snaps at running back behind Jeremy Hill and Rex Burkhead. Despite playing 16 games last season, Peerman didn’t get a single carry, and he only has 64 career carries in his seven-year career.

Starting long snapper Clark Harris is doubtful for this weekend’s game, necessitating Ott’s promotion. The Harvard product will be playing in his second NFL game, as he served as the Giants snapper during last year’s regular season finale. The 24-year-old has also spent time with the Patriots and Rams.

Williams, an undrafted rookie out of Clemson in 2015, has been inactive for every Bengals game this season. Owczarski notes that the defensive tackle’s tenure in Cincinnati is likely over, as the 23-year-old is unlikely to clear waivers.