The Browns released safety Jermaine Whitehead following an outburst of threats against critics on social media. While it does not excuse Whitehead’s actions, a number of fellow players understood what led him there, according to ESPN Staff Writer Jeremy Fowler. Fowler describes it as commonplace for players to return to their lockers after games and check their phones before even removing their pads. Players describe an accumulation of frustration with fans criticism that often goes beyond and enters the realm of hatefulness.

Steelers linebacker Bud Dupree had a similar, albeit substantially milder, incident last season involving his response to a tweet. Dupree mentioned specific tweets, some that included racial slurs, that eventually pushed him to react. The league has an instituted “cooling off period,” which restricts players ability to post on social media after games, but Whitehead’s threats came far after that period ended. It will be interested to see if Whitehead’s decision changes how the league, teams, and players approach social media and if more players choose to eliminate the practice altogether.

Here’s more news from around the league off the field: 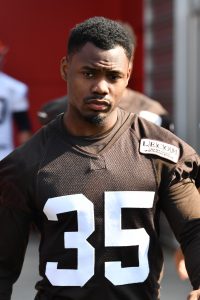 The Browns are done with Jermaine Whitehead. On Sunday, Whitehead went on a Twitter tirade that resulted in his banishment from the platform. On Monday morning, the Browns released the safety, per a club announcement.

[RELATED: Browns To Revert To Greg Robinson At LT]

The Browns, who previously said the rant was “totally unacceptable and highly inappropriate” cut him loose with a terse statement that was way under 280 characters. Whitehead will now be subject to the NFL’s waiver wire, but it remains to be seen whether any club will want to take a gamble on him at this time.

Whitehead on played every snap of the Brown’s 24-19 loss to the Broncos but did not record a single stop. When he was heckled for his performance, Whitehead responded poorly, and the Browns responded by dropping him from the roster.

Whitehead, a second-year pro, leaves the Browns after 41 tackles across eight games (all starts) in 2019. For his career, Whitehead has 34 appearances to his credit, including ten starts.