Geronimo Allison has found his third home in the NFL. The veteran wide receiver has signed with the Falcons, as the team announced on Monday. 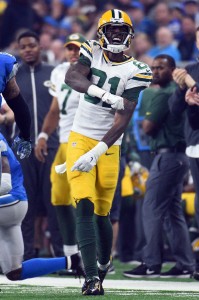 Allison, 28, began his career in 2016 with the Packers. He put up consistent numbers as a complimentary piece of the team’s offense, scoring six total touchdowns and averaging 11.7 yards per catch during his time in Green Bay. After an underwhelming 2019 campaign, though, he signed with the Lions the following offseason.

The former UDFA opted out of that season, however, so he didn’t make his Detroit debut until this year. Allison appeared in just three games, failing to register a catch. At six-foot-three and 200 pounds, he still generated interest as a free agent this offseason. One of the teams which worked him out earlier this month was the Ravens, a club in need of additions at the position.

Another, not long after, was the Falcons. Allison should have a path to a roster spot on a team which lost Calvin Ridley to suspension and Russell Gage in free agency. The team used its top pick on Drake London and traded for Bryan Edwards, but there should be room for him as an experienced depth option. He will look to contribute on a rebuilding offense led by those new wideouts, quarterback Marcus Mariota and tight end Kyle Pitts.

The Ravens will have two notable names among the tryout players at rookie minicamp. According to ESPN’s Jamison Hensley (on Twitter), wide receiver Geronimo Allison and defensive tackle Marcell Dareus are among those competing for a potential contract.

Allison made a name for himself while paired with Aaron Rodgers in Green Bay. The 28-year-old ended up spending four seasons with the Packers, collecting 1,052 yards from scrimmage and six touchdowns. He signed with the Lions back in 2020 but ended up opting out of that season.

He was released by Detroit at the end of the 2021 preseason, but he eventually caught on with their practice squad. He ended up seeing time in three games with Detroit last season.

Dareus was the third-overall pick back in 2011. He’d spend six-plus years in Buffalo, earning one All-Pro nod and two Pro Bowl appearances while collecting 35 sacks in 91 games. He was traded to the Jaguars during the 2017 season and spend two-plus seasons with the team, starting 22 of his 30 appearances. He sat out most of the 2020 season while recovering from core muscle surgery, and he didn’t find a gig for the 2020 or 2021 seasons.

The Lions have promoted Geronimo Allison from the practice squad to the active roster. The wide receiver will be eligible to play this week against the Rams with an opportunity to notch his first reception since 2019.

Allison showed promise with the Packers – particularly in the first quarter of 2018 when he recorded 19 catches for 289 yards and a touchdown. In 2o19, he was expected to take on a larger role, but the 6’3″, 202-pound target struggled in the slot. He finished out with 34 catches for just 287 yards and two scores, despite playing in all 16 games.

He hooked on with the Lions in 2020, a one-year deal for the veteran’s minimum, but he opted out. That deal tolled into this year, when he missed Detroit’s final cut. Now that the Lions are without wide receiver Quintez Cephus, Allison will get a chance to show what he can do.