Dobbs’ arrival in Detroit comes not long after he visited the Lions on a workout. The journeyman will provide depth behind starter Jared Goff and backup Nate Sudfeld on the taxi squad, after the Bears signed Tim Boyle to their active roster last week.

The Ravens saw starting quarterback Lamar Jackson exit the game yesterday, and they have made a move which casts further doubt on his Week 14 availability. Baltimore is signing veteran Brett Hundley to its practice squad, as announced (on Twitter) by his agent. The Ravens have confirmed the move. 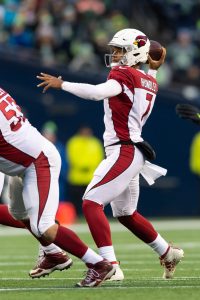 The 29-year-old has bounced around since entering the league as a Packers fifth-rounder in 2015. He has made 18 appearances and nine starts over the course of his career, only seeing the field during his stints in Green Bay and Arizona. He signed in Baltimore this past May to operate as training camp competition for a place on the team’s taxi squad.

Backup Tyler Huntley took over for Jackson following the latter’s knee injury yesterday, as he did to close out the 2021 season. The only other signal-caller the Ravens had before today, however, was undrafted rookie Anthony Brown, so depth would be needed in the event Jackson was unable to play this Sunday against the Steelers.

When speaking to the media on Monday, head coach John Harbaugh indicated that that will likely be the case. Jackson is dealing with a knee injury, and earlier this morning NFL Network’s Ian Rapoport stated that the two-time Pro Bowler is likely to miss at least one game as a result of it (video link). That would create the need for insurance provided by this deal, though Harbaugh has yet to rule out Jackson, calling him “week-to-week.”

Assuming Huntley is forced to start again, Sunday will mark his second career game against the Steelers. The former UDFA was in action during the regular season finale last year, an overtime victory for Pittsburgh. His statistics from yesterday – 27-of-32 passing, one interception, along with 41 yards and the game’s only touchdown on the ground – could provide a glimpse of what is to come during Jackson’s absence.

The win over the Broncos allowed Baltimore to remain in first in the AFC North at 8-4, but any missed time for Jackson could prove highly detrimental to their playoff seeding. The Ravens face a short week after the upcoming Pittsburgh game, as they are set to visit the Browns for a Saturday contest on December 17.

The Ravens are adding some training camp depth at the quarterback position. The team announced on Thursday that they have signed veteran Brett Hundley.

The soon-to-be 29-year-old was originally a fifth-round pick of the Packers in 2015. He made his Green Bay debut the following year, but didn’t register any starts until 2017. He went 3-6 during that campaign, but that remains the only time where he operated as a No. 1.

After one season as the backup in Seattle, he signed with the Cardinals in 2019. The three appearances he made that year remain the last regular season action he saw. He stayed with Arizona for one more season, though the team looked elsewhere when Kyler Murray needed replacing in-game late in the year. He then spent 2021 bouncing on and off of the Colts’ roster, and recently had a visit with the Vikings which didn’t end in a contract offer.

At the most, Hundley would be in line to compete for the No. 3 role in Baltimore. The Ravens have starter Lamar Jackson under contract for one more season, but his absence from OTAs has left the team thin at the position right now. The Ravens also have backup Tyler Huntley available; the former UDFA filled in for Jackson at the end of last season after his injury, and did enough during that span to secure the No. 2 role.

Baltimore also currently has Anthony Brown, a member of this year’s UDFA class, to take practice reps. In the absence of veteran Josh Johnson, who made one appearance for the Ravens last year, both he and, now, Hundley could find themselves in a competition to land on at least the team’s practice squad.