For the second time this month, the Titans are moving Bradley McDougald off their active roster. Tennessee released the veteran safety Tuesday, and it is not certain the team will bring him back this time.

McDougald started for the injured Amani Hooker in Week 2, playing 40 defensive snaps in the Titans’ overtime win over the Seahawks. Following that revenge game of sorts, the ex-Seattle starter is a free agent.

The Titans cut McDougald weeks ago but re-signed him to their practice squad before elevating him back to the active roster before Week 1. McDougald, 30, played 54% of Tennessee’s defensive snaps in Week 1, working as a backup. Despite Hooker residing on IR, McDougald is not presently in the picture with the 1-1 squad.

Included in last year’s Jamal Adams trade, McDougald has been a regular starter since 2015. He served as a primary Seahawks first-stringer from 2017-19 and spent last season as a Jets starter after being dealt to New York. An injury ended McDougald’s 2020 season midway through, however, and he spent months in free agency before the Titans added him.

Bradley McDougald is back in free agency. Three weeks after signing the veteran safety, the Titans released him Tuesday. However, this essentially amounts to a demotion. The Titans are signing McDougald to their practice squad.

Since McDougald is a vested veteran, he does not have to pass through waivers to join Tennessee’s taxi squad. Salary guarantees may be a factor here. Teams can release vested vets now to avoid full-season guarantees, which take effect in Week 1, making it possible McDougald returns to the Titans’ active roster next week on a team-friendlier agreement.

The Titans signed McDougald to a one-year deal worth $1.1MM. That would have become guaranteed had McDougald been on Tennessee’s active roster in Week 1. The team has Dane Cruikshank and Matthias Farley in place as their backup safeties going into their season opener.

McDougald, 30, spent three seasons as a Seahawks starter before the team included him in 2020’s Jamal Adams trade. The Jets deployed McDougald as a starter during their 2-14 season but saw him go down midway through the year. The Jets let McDougald walk this year. The 49ers represented McDougald’s only non-Titans connection this offseason.

While most teams were subtracting from their rosters today, the Titans were adding to theirs. The team signed three players today, including linebacker Nick Dzubnar (re-signed) and safeties Bradley McDougald and Clayton Geathers.

McDougald, a former undrafted free agent, started 70 games for the Buccaneers and Seahawks between 2015 and 2019. The veteran has seen time in 105 career games (82 starts), collecting 487 tackles, 10 interceptions, and 43 passes defended. He got into seven games for the Jets in 2020, finishing with 36 tackles, his lowest total since his rookie season. His 2020 campaign was cut short thanks to a shoulder injury.

Geathers had previously spent his entire career with the Colts, seeing time in 56 games. He started 22 games for Indy between 2018 and 2019, collecting 101 tackles and four passes defended. He sat out the 2020 campaign, and he found himself unsigned through most of this offseason.

Dzubnar spent the 2020 season in Tennessee, where he emerged as one of the team’s top special teams players, leading the Titans with 13 special teams tackles. He spent the first six years of his career with the Chargers, where he appeared in 65 games. 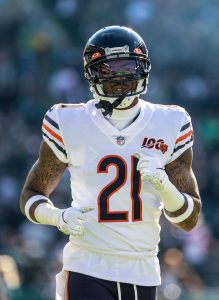 Some rare good news for the Jets. NFL.com’s Ian Rapoport reports (via Twitter) that quarterback Sam Darnold‘s precautionary MRI of his right shoulder only showed a “reaggravation.” The 23-year-old will attempt to work through the injury and won’t be sidelined.

Darnold has missed eight games through his three NFL seasons. If he’s forced to miss more time, the team could either turn to Flacco, third-stringer James Morgan, or practice squad signal-caller Mike White.

Some more notes out of the Big Apple: