The Seahawks will have a much different look on offense in 2022 in the absence of Russell Wilson. While the team does still have two accomplished pass-catchers on the perimeter, the tight end group could be in line for a more featured role in 2022. 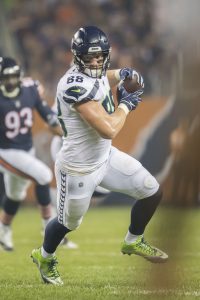 ESPN’s Brady Henderson cites that unit – rather than any one member of it – as Seattle’s offensive breakout candidate. The team’s TE usage generally ranked mid-pack at best during Wilson’s tenure at the helm, with the exception of Jimmy Graham‘s three-year stint in the Emerald City. With either Drew Lock or Geno Smith under center for at least the immediate future, though, more targets could be funnelled toward the middle of the field.

The primary beneficiary of such an offensive shift would be Noah Fant. Part of the package Seattle received from Denver in the Wilson trade, the 24-year-old has flashed potential during his first three seasons in the NFL, but fallen short of expectations given his draft stock. The No. 20 pick in his class (which, as Henderson notes, took him off the board right before Seattle would have selected him), Fant acknowledged the possibility for greater production after the trade.

“I’m kind of stuck at that high-600 [yards] ceiling, and I’ve got to break through that” he said. “I think I have every opportunity to do that in Seattle, and I’m excited to get to work to do that.”

More attention on the TE position could also see Will Dissly playing a more prominent role. The former fourth-rounder has put up consistent number during his four years with the Seahawks, earning him a three-year, $24MM deal in free agency to remain with the team. His blocking ability will always give him a path to playing time in the team’s run-heavy offense, but even a slight uptick in targets could lead to positive results for the offense. The same could be true of 2020 draftee Colby Parkinson, whom head coach Pete Carroll spoke highly of as part of his general optimism surrounding the group.

“We’ve got a lot of flexibility with these guys, and they’re going to be a big part of what we’re doing,” he said. It remains to be seen how the unit will mesh with a new QB and wideouts Tyler Lockett and D.K. Metcalf, but a large workload could be in store. 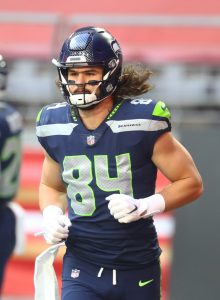 The Seahawks are likely to be without Gerald Everett for at least Week 4. The veteran tight end tested positive for COVID-19 and landed on Seattle’s coronavirus list, Doug Kyed of Pro Football Focus tweets.

Everett being fully vaccinated would allow him to return if he tests negative twice 24 hours apart. If the fifth-year tight end is not vaccinated, he is subject to 2020 protocols and is certain to miss Sunday’s game and perhaps Week 5 as well. Either way, the Seahawks are likely to be without their recently signed starter Sunday.

Seattle gave Everett a two-year, $6MM deal this offseason, bringing him over after hiring Rams assistant Shane Waldron as OC. Everett has started the season slowly, but he did haul in five passes for 54 yards in the Seahawks’ Week 3 loss to the Vikings.

The team has Will Dissly in place to pick up the slack. The injury-prone pass catcher has played 38% of the Seahawks’ offensive snaps through three games and has four receptions. Seattle also designated second-year tight end Colby Parkinson for return Wednesday and recently signed ex-Packer Jace Sternberger to its practice squad. Parkinson suffered a foot fracture for the second straight summer and has been on the mend since. The Seahawks have 21 days to bump him up to their active roster.

For the second straight summer, Colby Parkinson will begin rehab on a broken foot. The second-year Seahawks tight end will be out for an extended period after this second foot fracture, Adam Jude of the Seattle Times notes.

The break occurred in the same spot — the fifth metatarsal — Parkinson damaged while working out on his own last summer, per Pete Carroll, but the Seattle HC said this injury is not as bad as Parkinson’s 2020 ailment. Though Carroll is known for injury-related positivity, that would appear to be a good sign for a player who has run into bad luck to start his career.

The injury occurred on the final snap of Wednesday’s practice, Carroll said. Participating in his first training camp, Parkinson had fared well and was progressing toward a role in the Seahawks’ offense. But the 6-foot-7 Stanford product will be on the mend again.

Parkinson landed on the Seahawks’ NFI list last year; since this year’s injury occurred during camp, that designation will not be permitted. But the NFL has greenlit another year of unlimited returns from IR, which would allow the Seahawks to stash Parkinson there once he is carried through to the 53-man roster after roster cutdown day.

The Seahawks have run into rampant injury trouble at tight end in recent years. Will Dissly suffered season-ending injuries in back-to-back years, and 2020 stopgap solution Greg Olsen missed much of the season because of a foot injury. Seattle now has Gerald Everett in place as its top tight end, and Dissly remains on the roster. Parkinson’s setback will affect the team’s depth, however. 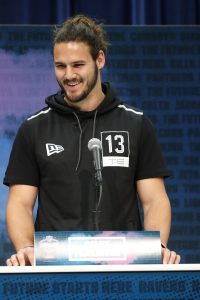