To make room for kicker Aldrick Rosas and safety Jeff Heath, the Saints effectively moved on from a veteran today. The team announced that they’ve placed Tommylee Lewis on injured reserve. 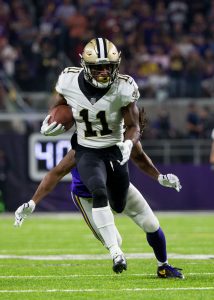 While the NFL recently made it easier for players to return from injury, that still doesn’t apply to players placed on the IR prior to the regular season. In order for a player to be “eligible to be designated for return” from IR/NFI, they need to be on the 53-man roster after final cuts (via NFL Network’s Tom Pelissero on Twitter). This means players who are placed on IR during preseason are effectively sidelined for the season. It’s uncertain what ailment Lewis is dealing with, but the 28-year-old could conceivably negotiate an injury settlement if he hopes to see the field in 2021.

Lewis has spent the majority of his NFL career in New Orleans, seeing time in 39 games. He made a name for himself as a key returner, collecting 45 punts for 404 yards and 27 kicks for 617 yards. He also got some run on offense, compiling 30 touches for 306 yards and two touchdowns.

The former undrafted free agent signed with the Panthers last August but was waived before the start of the regular season. He caught on once again with the Saints, and he proceeded to get into five games. He re-signed with the organization back in July.

A Saints return man in four of the past five seasons, Tommylee Lewis remains on the team’s radar. Lewis visited the Saints on Thursday, Tom Pelissero of NFL.com tweets.

This meeting comes days after the Vikings brought in the 5-foot-7 return man/occasional wideout for a visit, according to SI.com’s Howard Balzer (on Twitter). That workout, however, came along with Dede Westbrook‘s. The Vikings agreed to terms with Westbrook last weekend, seemingly signaling Lewis would need to look elsewhere to land a 2021 gig.

The Saints have already agreed to multiple reunions with Lewis, whom they initially signed as a UDFA back in 2016. The team did not tender him a contract as an RFA in 2019, and Lewis signed with the Lions. However, he made his way back to New Orleans via reserve/futures deal in January 2020. The Saints cut him last August, but after the Panthers did the same, Lewis migrated back to the Saints and played five games in 2020. Lewis, 28, has only suited up for the Saints in a regular-season game.

The Lewis-Saints meeting comes after news surfaced of Deonte Harris‘ DWI arrest. New Orleans’ incumbent return man was arrested July 16 in Maryland, Katherine Terrell of The Athletic tweets. Harris, 23, was booked on multiple charges. The ex-UDFA has been with the Saints since 2019, when he broke out for an All-Pro season as a rookie return man.