Briean Boddy-Calhoun has joined his sixth NFL team. The veteran defensive back is signing with the Titans, reports Aaron Wilson (via Twitter). 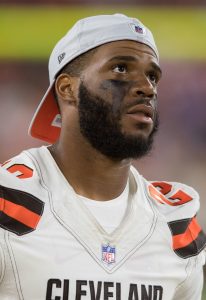 After appearing in 43 games through his first three seasons in the NFL, the cornerback has been limited to only four games over the past two seasons. He stayed unsigned for most of the 2020 campaign, but after joining San Francisco’s practice squad in December, he managed to get into one game for the 49ers, appearing exclusively on special teams.

While Boddy-Calhoun‘s recent inability to stick around the league is worrying, the former undrafted free agent showed enough to stick around the NFL during his stint with the Browns. In total, the 28-year-old has seen time in 47 games (22 starts), collecting 151 tackles, three interceptions, and three sacks. The cornerback has spent time with the Jaguars, Browns, Texans, Colts, and 49ers.

This transaction follows the Titans placement of defensive back Chris Jones on the Reserve/COVID-19 list. Boddy-Calhoun‘s ability to play both cornerback and safety provides him a better opportunity at a roster spot, and he could provide some experience to a team that added three defensive backs in this year’s draft (Caleb Farley, Elijah Molden, and Brady Breeze).

After adding one defensive back earlier today, the 49ers are letting go of another. San Francisco has waived cornerback Briean Boddy-Calhoun, reports Cam Inman of The Mercury News (via Twitter).

Boddy-Calhoun joined the 49ers practice squad last December, and he ended up appearing on 16 special teams snaps in Week 14. He re-signed with the organization back in March, but the addition of Tony Jefferson (along with the selection of third-round rookie Ambry Thomas) made Boddy-Calhoun expendable.

The 28-year-old cornerback has spent time with five organizations during his five-year career, including the Jaguars, Browns, Texans, Colts, and 49ers. He appeared in 43 games (21 starts) for Cleveland between the 2016 and 2018 seasons, collecting 138 tackles, three interceptions, and 19 passes defended. He’s appeared in only four games since leaving the Browns in 2019.

With Boddy-Calhoun out of the picture, the likes of Ken Webster, Mark Fields II, and Tim Harris will have an increased chance of making the roster.