The Lions will add to their receiver room on roster cutdown day. They are sending two draft choices to the Broncos in exchange for wideout Trinity Benson, Mike Klis of 9News tweets. 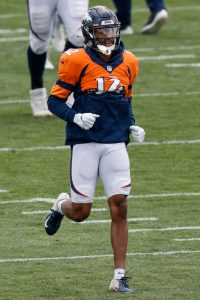 A 2019 UDFA, Benson will join a less experienced Detroit receiving corps and fetch Denver fifth- and seventh-round picks in 2022. The Lions will receive a 2023 sixth-rounder from the Broncos.

Benson played well in the preseason with the Broncos, catching eight passes for 80 yards and two touchdowns to play a minor role in the team’s quarterback competition. But the Division II product was not going to advance far on a team housing Courtland Sutton, Jerry Jeudy, K.J. Hamler and Tim Patrick atop its depth chart. Benson spent the bulk of the past two seasons on Denver’s practice squad and signed two reserve/futures contracts with the team.