Free agent guard Laurent Duvernay-Tardif is once again temporarily putting his NFL career on hold to focus on his other profession. The Canadian offensive lineman is set to enroll in a residency program at a hospital near Montreal this summer and will wait until the onset of the 2022 campaign to decide on his NFL future.

“I’m going to prioritize medicine… and we’ll see in September if there’s a fit,” the 31-year-old said, via ESPN.com. “After eight years in the NFL, and I don’t want to sound pretentious by saying this, but I think I’ve earned the right to do what’s best for me and not just for football and kind of bet on myself a little bit.”

In 2020, Duvernay-Tardif became the first player in the league to opt out of the season, choosing to devote his time to a local long-term care facility. The decision came after the Chiefs’ second consecutive Super Bowl appearance, and tolled his contract to the point where it expired at the conclusion of the 2021 season.

Upon his return, the former sixth-rounder found that his right guard spot was occupied by Trey Smith, one part of Kansas City’s efforts to completely rebuild its offensive front. Sidelined by a broken bone in his hand, he never played again for the Chiefs. Instead, he waived his no-trade clause and was dealt to the Jets in November. He started seven of eight games in New York.

Now a free agent for the first time, given the expiration of the five-year extension he signed in 2017, Duvernay-Tardif (who received his medical doctorate one year later) faces the possibility of being on the move again, should he return to the NFL. The Jets added Laken Tomlinson in free agency, who is in line to pair with 2021 first-rounder Alijah Vera-Tucker at the guard spots. Despite the uncertainty regarding his future, he is making it clear this latest decision is not a retirement.

“I’m really comfortable with the risk, and I’m pretty confident there’s going to be an offer on the table in September if I want it,” he said. “And if I want it I’ll take it. If medicine is going well and I feel like I’ve got to be out there in front of 80,000 people to play the sport I love, well, I’ll go, but I think I want it to be more on my terms.”

The Chiefs have agreed to trade guard Laurent Duvernay-Tardif to the Jets, according to sources who spoke with NFL.com’s Mike Garafolo (Twitter link). In exchange, the Jets will send tight end Daniel Brown to Kansas City.

It appears that Duvernay-Tardif personally signed off on the trade, since he’s one of ~10 NFL players to have a no-trade clause. The Chiefs received — and rebuffed — calls on LDT throughout the summer, but they’ve took Gang Green up on their pre-deadline offer.

LDT was a full-time starter for the Chiefs from 2015-19, but opted out of the 2020 campaign in order to treat COVID-19 patients. The licensed medical professional has yet to play this year, due to a broken bone in his hand.

This is just the latest move in the Chiefs’ offensive line revamp. After the Bucs clobbered KC’s front five in the Super Bowl, the Chiefs swung a blockbuster deal for tackle Orlando Brown Jr. and used a second-round choice to take center Creed Humphrey. LDT was set to be a part of that lineup, but his hand injury pushed sixth-round pick Trey Smith into a first-string role instead. Although he hasn’t played since the ’19 season, LDT offers serious experience with 60 games, including 57 starts.

Brown, 29, first entered the league as an undrafted free agent out of James Madison. After stints with the Ravens and Bears, he joined up with the Jets in 2019. He’s appeared in just six games for the Jets, with the bulk of that action coming in ’19. Known more for his blocking, Brown has just 44 catches for 420 yards and two touchdowns across six-and-a-half seasons.

Although he was a full-time starter for the Chiefs from 2015-19, Duvernay-Tardif wasn’t guaranteed his old job back as the Chiefs focused on revamping their offensive line this past offseason. While the lineman started 14 games for Kansas City in 2019, he sat out the 2020 campaign as he helped fight COVID-19. The 30-year-old also suffered a broken bone in his hand earlier this month, and his recovery was going to cut it close for the start of the season.

After watching Patrick Mahomes run for his life in the Super Bowl against the Bucs’ ferocious pass-rush, the Chiefs made it a priority to overhaul their O-line. They traded for tackle Orlando Brown Jr., drafted center Creed Humphrey in the second-round, and signed veteran guards Austin Blythe and Kyle Long. Duvernay-Tardif was battling with sixth-round pick Trey Smith for the starting right guard gig, a job that the rookie likely secured following the veteran’s hand injury.

Still, considering Duvernay-Tardif’s starting experience, it’s not a surprise that teams would have interest in him. The former sixth-round pick has started 57 of his 60 games since entering the NFL in 2014.

The Chiefs are the latest team to suffer a significant injury in training camp. Guard Laurent Duvernay-Tardif broke a bone in his hand during practice and is out 4-6 weeks, sources told Ian Rapoport of NFL Network (Twitter link).

The good news, as Rapsheet notes, is that the injury won’t require surgery, “which means the opener is a very real possibility.” This injury also might’ve been a bigger deal had Kansas City not dramatically upgraded their offensive line this offseason. After watching Patrick Mahomes run for his life in the Super Bowl against the Bucs’ ferocious pass-rush, the team made it a priority to overhaul his O-line.

They traded for tackle Orlando Brown Jr., drafted center Creed Humphrey in the second-round, and signed veteran guards Austin Blythe and Kyle Long. LDT, of course, is perhaps most notable for being a doctor when he’s not battling it out in the NFL trenches, and he opted out of the 2020 season to help fight COVID-19.

Although he was a full-time starter for the Chiefs from 2015-19, Duvernay-Tardif wasn’t guaranteed his old job back even if he was fully healthy. We heard last month that he was battling it out with sixth-round rookie Trey Smith for a starting spot. This injury would seem to give Smith a pretty big leg up in that competition, so it’s highly possible Duvernay-Tardif starts the season as depth.

It’s fairly common for disgruntled NFL players to give their teams a short list of acceptable trade destinations. However, it’s still quite rare for players to hold contractual veto power over a trade. Currently, there are only nine NFL players with a no-trade clause in their deals, as ESPN.com’s Field Yates tweets:

Watson and Wilson are among the QBs who can block trades. They’re both putting it to use, albeit in different ways. Watson wants out — even after finally meeting with new head coach David Culley – and he’s steering himself towards a small group of teams, including the Dolphins and Panthers. Wilson, meanwhile, says that he doesn’t want to get traded and doesn’t expect to get traded. But, if the Seahawks do shop him, he wouldn’t mind joining up with the Bears, Cowboys, Saints or Raiders. In beating out several other teams for Watt, the Cardinals included the clause in the star defender’s contract. 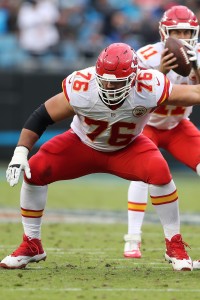