The Patriots have converted $2.85MM of defensive lineman Deatrich Wise’s base salary into a signing bonus (Twitter link via Field Yates of ESPN.com). The adjustment will carve out $1.9MM in additional salary cap room for the Patriots. 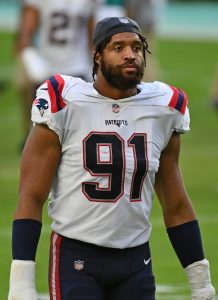 The move will allow the Pats to absorb the salary of wide receiver DeVante Parker, who came from the Dolphins — along with a 2022 fifth-round pick — in exchange for a 2023 third-round choice. Parker’s deal calls for a $5.65MM base salary in 2022 and $5.7MM in 2013, though there’s zero guarantees remaining on his deal. For the Pats, it’s a thrifty WR upgrade after missing out on more ambitious targets like Odell Beckham Jr.

Wise Jr., 28, has blossomed into a quality edge player who can also moonlight at defensive tackle. Last year, the 2017 fourth-round pick was rewarded with a four-year, $22MM deal. This revision probably won’t impact his bottom line much, but it will give the Patriots the flexibility they need in 2022.

Before the move, the Patriots were near the bottom of the league in available cap space. They’re still in the cap cellar, but they’ll likely restructure other veterans in the coming weeks to clear up the books.

Wise finished 41 tackles, three sacks, and one forced fumble last year while starting in nine of his 16 games played.

The Patriots have been the most aggressive team in the league so far, signing free agents left and right, and now they’re bringing back one of their own. New England has agreed to terms on a new deal to bring back defensive lineman Deatrich Wise, a source told Mike Reiss of ESPN.com (Twitter link).

A fourth-round pick out of Arkansas back in 2017, Wise just wrapped up his initial rookie contract. He’s been a consistent role player during his four years in New England, starting at least three games each season but never more than seven. He had five sacks as a rookie and then 4.5 as a sophomore.

He started seven games this past year and appeared in all 16, playing around 55 percent of the defensive snaps. He finished with only 2.5 sacks this time as the Patriots’ pass-rush struggled as a whole.

The team has been making moves to upgrade the defensive front by adding defensive tackle Davon Godchaux and pass-rusher Matt Judon, but they clearly didn’t feel like that made Wise expendable.