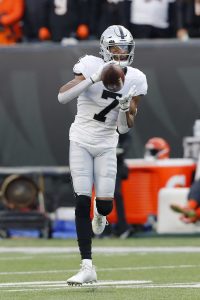 This deal comes not long after the Jags agreed to give Christian Kirk top-10 receiver money. They are signing Jones for three years and $24MM, with RapSheet adding the contract can max out at $30MM. The deal contains $14MM in guaranteed money, with his 2022 and 2023 base salaries fully guaranteed (per PFF’s Doug Kyed on Twitter). The deal also includes up to $1MM in incentives for each year of the deal.

Although Doug Pederson expressed interest in bringing back DJ Chark, the Jags have now committed big money to one target and reasonable cash to another wideout. Kirk and Zay Jones join Marvin Jones and Laviska Shenault as the top Jacksonville receivers entering the 2022 league year. Evan Engram, who agreed to a one-year deal, will also be part of the equation to help Trevor Lawrence after his rocky rookie year.

A former second-round Bills pick, Zay Jones resurfaced as a decent Raiders option last season. With Henry Ruggs being cut midseason, the Raiders depended more on Jones than they had previously. He caught 47 passes — 33 more than he did in 16 2020 games — for 546 yards and a touchdown last season. While this contract is somewhat surprising, considering Jones reupped with the Raiders for one year and $2.5MM in 2021, the Jags clearly believe he can sustain that performance level.

Doubling as one of the most expensive days in Jaguars history, Monday has also included deals with Brandon Scherff, Folorunso Fatukasi and Foyesade Oluokun. The team that won four games over the past two seasons is certainly bringing in talent, regardless of cost.

The Raiders cut Henry Ruggs on Tuesday night. The team announced the transaction, which comes shortly after the second-year wide receiver was arrested for his role in a fatal car accident Tuesday morning. 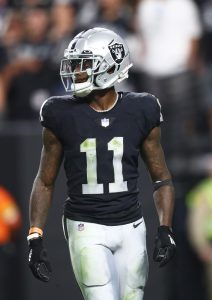 Ruggs is facing two felony charges for an accident that left a woman dead. Las Vegas police say that Ruggs was impaired when his Corvette crashed into another car and killed the driver of the other vehicle. The accident occurred just before 4am in a residential neighborhood west of the Las Vegas Strip. Ruggs and a passenger in his vehicle were hospitalized. Upon being released from a Las Vegas-area hospital Tuesday, Ruggs was booked at the Clark County Detention Center.

Authorities identified the victim as a 23-year-old woman. The collision caused the victim’s vehicle to burst into flames, killing the woman and her dog, according to ESPN.com. Ruggs faces charges of DUI resulting in death and reckless driving. The first charge carries a possible sentence of two to 20 years in prison. The second runs from probation to six years. Ruggs, 22, is due to appear in court Wednesday.

Ruggs and a female passenger in his Corvette suffered non-life-threatening injuries. The woman who was in Ruggs’ car remains hospitalized. Raiders players returned to the team’s Henderson, Nev., facility Monday, after their bye week, but had another day off Tuesday, according to ESPN.

Although players hit with felony charges are eligible for the commissioner’s exempt list, which keeps those players on teams’ rosters while legal matters play out, the Raiders acted swiftly to move on from Ruggs. This marks an abrupt end to Ruggs’ Raiders tenure, and the former Alabama standout’s NFL career is obviously in serious jeopardy. Ruggs will head to waivers, though that will almost certainly be irrelevant here. The Raiders have a clear path to voiding the remaining guarantees in Ruggs’ four-year, $16.67MM rookie contract. Ruggs’ deal was fully guaranteed.

Some Raiders staffers preferred Ruggs’ Alabama teammate, Jerry Jeudy in last year’s first round, but the team made Ruggs the first receiver drafted in 2020. Las Vegas drafted Ruggs with the 12th overall pick. The deep threat struggled as a rookie, catching 26 passes for 452 yards in 13 games. Ruggs had shown improvement to become a more consistent part of Las Vegas’ offense this season, having made 24 receptions for 469 yards and two touchdowns through seven games.

Las Vegas has fellow homegrown wideouts Hunter Renfrow and Bryan Edwards signed beyond 2021, with Darren Waller under c contract beyond this season as well. As of now, Zay Jones is set to step into Ruggs’ starting position, Vincent Bonsignore of the Las Vegas Review-Journal notes. The Ruggs exit certainly leaves a void in the AFC West-leading team’s passing attack, but Renfrow, Waller and Edwards each have posted yardage totals north of 300 this season. Ruggs exited Week 7 as the team’s leading receiver, however.

Acquired nearly two years ago via in-season trade, Zay Jones will stay with the Raiders. The former second-round pick will stay in Las Vegas on a one-year deal, Ian Rapoport of NFL.com tweets. 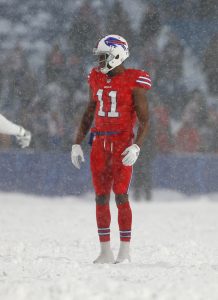 With Nelson Agholor impressing on a low-end contract last season, Jones did not have much of a role on offense. The ex-Bills draftee caught just 14 passes for 154 yards and a touchdown. This came after a 20-reception, 147-yard debut slate in Oakland two seasons ago. But Jones will be back to team with the likes of Hunter Renfrow and 2020 draft picks Henry Ruggs and Bryan Edwards.

John Brown‘s arrival, however, figures to relegate Jones to largely a special teams role. Brown’s Bills signing in 2019 helped lead Jones to Oakland, with Buffalo shipping the former starter west early in the 2019 season. The East Carolina product caught 56 passes for 652 yards and seven touchdowns during Josh Allen‘s 2018 debut season but has been quiet on the receiving front since.

Agholor agreed to terms with the Patriots on the first day of free agency, but Jones’ return along with his three younger receiver mates will bring the most continuity to this group since Jon Gruden returned to the Raiders. The team has shuffled up its aerial corps consistently during Gruden’s tenure. As of now, the Raiders look to feature a familiar receiving crew next season.

Bills wide receiver Zay Jones underwent knee surgery, head coach Sean McDermott told reporters. Jones will miss the remainder of the offseason program, but the good news is that the team believes he’ll be good to go in time for the start of the regular season.

The Bills are certainly hoping that Jones will be healthy come September given their lack of depth at wide receiver. After the departures of Jordan Matthews and Deonte Thompson this offseason, the Bills’ have an iffy group at WR beyond star Kelvin Benjamin. Veterans Andre Holmes, Jeremy Kerley, Kaelin Clay, and Rod Streater are fighting for roster spots along with late-round rookies Ray-Ray McCloud and Austin Proehl.

If Jones is in for a lengthier recovery than expected, the Bills could theoretically look into signing Dez Bryant to help fill the gap. However, GM Brandon Beane didn’t sound gung-ho about the idea back in April.

“We have looked at Dez on tape, but I wouldn’t take it any further and I don’t know where that would go,” Beane said. “We’re looking to get better at all positions and receiver is one, so if we thought that was the right fit for us we would potentially pursue it.”

Bills GM Brandon Beane addressed reporters on Monday morning and discussed the team’s mindset heading into the draft as well as the status of wide receiver Zay Jones. Here’s a look at the highlights:

Bills wide receiver Zay Jones has been arrested and charged with felony vandalism following an incident in Los Angeles Monday night, according to a report from TMZ Sports.

TMZ obtained security footage of what appears to be an extremely bizarre entanglement, one in which Jones is fully nude and behaving erratically all while his brother — the Vikings’ Cayleb Jones — attempts to restrain him. Zay Jones eventually kicked a hole through a glass window in Cayleb’s girlfriend’s apartment, and photos show glass and blood strewn about.

“We are aware of the incident involving Zay Jones,” the Bills said in a statement, per Kimberley A. Martin of the Washington Post (Twitter link). “We are still in the process of gathering more information on the matter. At this point, we will have no further comment.”

Buffalo selected Jones out of East Carolina in the second round of the 2017 draft. In his rookie campaign, Jones started 10 games and posted 27 receptions for 316 yards and two touchdowns.