3:25pm: The Giants have used one of their injury activations on Lemieux, who has not played since September 2021. The third-year veteran is expected to see steady action in his Week 11 debut.

9:42am: Shane Lemieux has been limited to only one game over the past two seasons, but the Giants lineman should be back on the field this weekend. The Giants are expected to activate the offensive guard from injured reserve today, according to Art Stapleton of NorthJersey.com (on Twitter). Lemieux is expected to immediately start for New York. 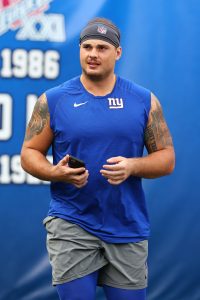 Lemieux suffered a foot injury during the Giants’ preseason opener, and that issue (and the subsequent surgery) ended up keeping the offensive lineman off the field for months. The 25-year-old returned to practice earlier this month, and now he’ll be thrown right into the fire as he’s expected to start against the Lions.

The former fifth-round pick immediately had a role for the Giants as a rookie, starting nine of his 12 games that season. While sites like Pro Football Focus weren’t particularly fond of his performance in 2020, he was still expected to play a significant role on the offensive line in 2021. However, a knee injury ended up limiting Lemieux to only a single appearance last season. Lemieux was once again expected to play an important role in 2022, but his foot injury derailed that plan.

“It’s been a hard couple years,” Lemieux recently told Ryan Dunleavy of the New York Post. “I’m a ballplayer. I love football. Being on the field is the best feeling in the world. When you get taken away from the game, you realize how important it is to you. I’m ready to get back out there, for sure.”

The Giants offensive line has struggled with injuries all season, but the unit is slowly and surely getting healthier. In addition to Lemieux, Evan Neal and Ben Bredeson are both expected to soon return from their respective knee injuries.

Shane Lemieux was limited to just one game last season, and injuries have once again become a problem before the 2022 campaign has begun. The Giants’ o-lineman will not play in Week 1, as confirmed by head coach Brian Daboll (Twitter link via Fox Sports’ Ralph Vacchiano).

Worse still, Daboll also said that “I wouldn’t anticipate him anytime soon.” That is unfortunate news for the Giants, given Lemieux’s projected role as the team’s starting left guard. It is also, of course, a disappointing development from the 25-year-old’s perspective, given his recent past.

Lemieux underwent season-ending knee surgery last September, which dealt a serious blow to New York’s offensive line. The unit as a whole was ravaged by injury, and struggled throughout the season. The Oregon alum has made just 13 appearances across his first two years in the league, though 10 of those have been starts. He earned a PFF grade of just 32 as a rookie, but has done enough in practices since to maintain a first-team position.

This latest issue stems from a foot injury the fifth-rounder suffered during the team’s first preseason contest. The fact that he has already been ruled out for the regular season opener points to an IR stint being possible; in that event, he would miss at least the first four games of the campaign. That is already the case for tackles Matt Peart and Nick Gates.

Third-round rookie Joshua Ezeudu and 2021 trade acquisition Ben Bredeson are among the candidates to replace Lemieux, both of whom are dealing with injuries of their own. In any event, the Giants will once again be without an offensive starter for at least a few weeks.

The knee injury Shane Lemieux suffered in late July has continued to plague him, and the Giants will give the young guard time to recover. They placed Lemieux on IR Thursday.

Inserted into the Giants’ starting lineup after Will Hernandez‘s COVID-19 contraction last year, Lemieux did not give up the job the rest of the way. After New York released Kevin Zeitler this offseason, Lemieux and Hernandez started in Week 1. Surgery may be in the cards for Lemieux, though that is not yet certain. The 2020 fifth-round pick playing again this season would be a surprise, per Jordan Raanan of ESPN.com (on Twitter).

Lemieux’s injury will force the Giants to get creative on their offensive line. They are set to start recent trade acquisition Billy Price at center and slide Nick Gates to left guard, Raanan notes. Such a promotion occurring in Week 2, which features a short week and a trip to Washington, will represent a stiff challenge for Price. The former first-round pick could not stick in the Bengals’ lineup, despite the team’s lofty investment, and was traded to the Giants for a late-round pick.

Lemieux could not make it through the first half against the Broncos, playing only 17 snaps. Ben Bredeson, the other O-line trade acquisition the Giants made ahead of the season, replaced him in the lineup. But the ex-Raven is set to return to a reserve role tonight.

Considering the issues the Giants had up front with their starting five available over the past several weeks, the team needing to make changes ahead of a Thursday road tilt is certainly bad news. The Giants are looking to avoid an 0-2 start for the first time since 2016.