That’s a wrap. The Jets have inked third-round safety Ashtyn Davis to his rookie contract to round out their 2020 draft class (Twitter link via Manish Mehta of the Daily News). 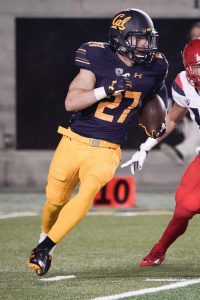 Davis, a Cal product, underwent core muscle surgery just before the draft. However, he’s expected to be 100% healthy by Week 1.

Safety seems to be Davis’ most likely position in the pros, but he also spent time at cornerback early in his collegiate career. The former walk-on is ready, willing, and even eager to line up at different spots in Gregg Williams‘ defense.

“I think I can contribute anywhere they put me. I’m comfortable on the outside and inside, whatever the case may be,” Davis said. “After my first year of playing safety, I wanted to know every position and not just my responsibility. That way if someone went down they could put me in.”

Per the terms of his slot, Davis has received a four-year, $4.9MM deal. Here’s the full rundown of the Jets’ nine-man freshman class, via PFR’s tracker:

The Dolphins held a predraft video meeting with Oregon quarterback Justin Herbert, according to Barry Jackson of the Miami Herald, who reports no NFL team has done as much work on Herbert as the Dolphins. Herbert is fully expected to come off the board in Round 1 of next week’s draft, but it’s unclear if Miami will be comfortable taking him with the fifth overall selection. Per Jackson, the Dolphins’ questions about Herbert are twofold: he’s more of an introvert than an extrovert, and he is occasionally inaccurate.

Miami also conducted a video conference with LSU running back Clyde Edwards-Helaire, per Jackson, who indicates the Dolphins could consider Edwards-Helaire with pick Nos. 39 or 56 in the second round. While the Dolphins already signed veteran Jordan Howard this offseaon, Edwards-Helaire, who caught 55 passes in 2019, would add another dimension to Miami’s backfield.

Here’s more on the upcoming draft, which is now only one week away: