More roster cuts to pass along! The Cowboys have now gotten their roster down to 53 as well, making a slew of cuts in the process. Here are the latest cutdown day casualties out of Dallas:

Thompson played in 15 games with the Cowboys last year and started seven, but wasn’t able to crack the 53-man roster this time around. The safety started four games for Dallas the year before in 2019. Sprinkle flashed some potential with Washington in 2019 when he had 241 yards, but he was a non-factor in the passing game last year.

Hamilton also started a couple of games for the Cowboys last year, and the release of several significant contributors shows Mike McCarthy was serious about overhauling that side of the ball. Hardy is the undrafted rookie who has been featured on this year’s season of HBO’s ‘Hard Knocks.’ He’s expected to be added to the practice squad if he clears waivers, Michael Gehlken of the Dallas Morning News tweets.

Anthony Brown is heading to the IR. The Cowboys announced that the safety has been placed on the injured reserve with a rib injury. Thanks to the change in IR rules, Brown will be sidelined for at least three weeks. 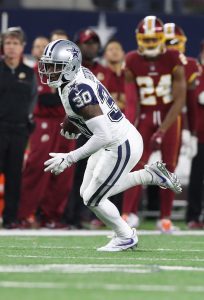 The 2016 sixth-round pick has spent his entire career with the Cowboys, starting 34 games along the way. Brown was limited to only nine games in 2019 thanks to a triceps injury, finishing the campaign with 17 tackles and five passes defended. Between the 2017 and 2018 campaigns, Brown started 20 of his 31 games, compiling 85 tackles, three sacks, three interceptions, two forced fumbles, and 19 passes defended. It was that production that led to Brown’s three-year, $15.5MM deal with Dallas this past offseason.

Jourdan Lewis will have an opportunity to step up in Brown’s stead, and Chidobe Awuzie could see an expanded role. Dallas could even turn to defensive back Brandon Carr, who was promoted from the practice squad last week.

With the open roster spot, the Cowboys have promoted offensive tackle Eric Smith from the practice squad. The 2017 undrafted free agent out of Virginia will provide the team with some extra depth in case Tyron Smith is unable to play.