One new member of the Bengals didn’t have the best Fourth of July. Rookie defensive end Darius Hodge was arrested on the holiday, per WRAL 5 in North Carolina. 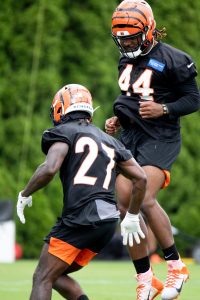 Unfortunately the story is light on details, but they do report that the arrest was for an alleged assault all the way back in 2019. Hodge was “charged for hitting a man repeatedly,” but that’s about all they have at the moment. On the surface it doesn’t sound like anything overly serious, but this certainly won’t help the undrafted free agent’s chances of making the team.

The Marshall product had nine tackles for loss and 6.5 sacks in 10 games last year. He was part of a relatively small Bengals UDFA class, and Cincy could use some edge rushing help, so he seemed to have a decent shot initially.

Working in his favor is the fact that this alleged incident happened before his NFL career started, so he won’t be subject to league discipline for it.

The Bengals have signed six undrafted free agents, per a club announcement:

Phillips capped his collegiate career with an All-MAC selection and helped Ball State beat San Jose State for the school’s first bowl game win. All in all, he notched 137 tackles, eight interceptions, and 18 pass deflections in college. Phillips fully expected to be drafted after earning an invite to the combine, but surgery for a herniated lumbar disc held him back. Now, he’ll look to earn his spot on the Bengals’ Week 1 roster.