The Seahawks have signed cornerback Blessuan Austin (Twitter link via Dave Wyman of KCPQ). Austin will serve as a depth option for the ‘Hawks as they prepare to face the Colts on Sunday. 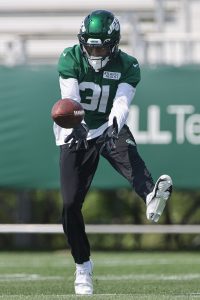 The Jets shopped Austin towards the end of the summer but couldn’t find a taker for him. Last week, they cut him loose in order to pick up linebacker Quincy Williams, the brother of defensive lineman Quinnen Williams.

The 25-year-old Rutgers product now gets to reunite with old pal Jamal Adams while he supports the Seahawks’ CB group. For now, that leaves the Seahawks with six CBs in total — Sidney Jones, D.J. Reed, Tre Flowers, Tre Brown, and Nigel Warrior.

The Patriots have carried at least one undrafted rookie in Week 1 for the past 15 seasons, which brings intrigue to their UDFA class, as Nick Underhill of The Athletic writes.

Moral of the story: Follow the money, but not too closely.