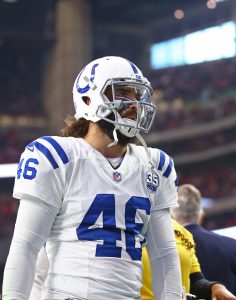 Rhodes signed his exclusive rights tender March 19, giving the team some time to work out a brand new pact. It marks a big pay bump for Rhodes, who entered the league as an undrafted free agent at the linebacker position.

Rhodes has played in 36 games for the Colts since joining the team in 2016 and has appeared in all 32 games since switching over to LS in 2017.