Michael Thomas‘ Dolphins contract expires after Week 17, and the fifth-year safety will not be participating in Sunday’s game against the Bills. 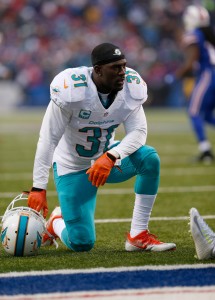 The Dolphins announced they placed Thomas on IR. He had been recovering from a PCL injury and missed the previous two Miami games. The Dolphins claimed safety Trae Elston off waivers from the Bills to take Thomas’ roster spot.

Thomas played this season on an RFA tender ($1.797MM). He will be a UFA this coming March. The former UDFA who’s been a part-time starter the past three seasons posted a message to Dolphins fans on Twitter. Thomas played 179 defensive snaps this season, and Pro Football Focus graded those fairly well despite the Stanford product being categorized as a part-time performer.

A 2016 UDFA, Elston played in 13 games for the Bills this season after beginning his season with the Eagles. Elston is under contract for next season, giving the Dolphins a chance at an offseason evaluation for potential safety depth.