The 49ers announced they’ve released Garvin and promoted defensive back Tyvis Powell from the practice squad. Foster is set to make his season debut Sunday against the Chiefs.

This marks the second time Garvin’s been released in a month. He signed with the Dolphins as a free agent this offseason but did not make Miami’s 53-man roster. The 49ers added him as insurance shortly after Week 1 and deployed him as a backup against the Lions last week.

Since Garvin is a sixth-year veteran, he does not have to pass through waivers at this point on the NFL calendar. Garvin’s played for the Steelers, Redskins, Seahawks and 49ers, spending three years in Pittsburgh and starting three games in Seattle last season.

Powell played in three games for the 49ers last season. He spent time with the Seahawks in 2016. San Francisco starting safety Jaquiski Tartt is questionable for Sunday’s game, perhaps prompting the team to add depth in its secondary. Both Richard Sherman and Akhello Witherspoon were limited this week in practice, although both upgraded to full work by Friday.

The Dolphins are signing former Seahawks and Redskins linebacker Terence Garvin, a source tells Ian Rapoport of NFL.com (on Twitter). Garvin started in three games last year, but he has made his name as a special teams standout. 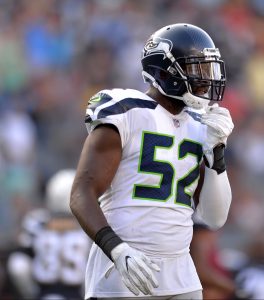 Garvin, 28, entered the league as an undrafted free agent out of West Virginia in 2013 and spent the first three years of his career with the Steelers. He then went on to play for the Redskins in 2016 and the Seahawks in 2017.

Last year, Garvin saw the most defensive playtime (18%) of his career in 2017 due to injuries. All in all, he tallied nine tackles, one sack, and one forced fumble in 15 games for Seattle.

Garvin will serve as a reserve for the Dolphins while their search for a third starting linebacker continues.

Garvin, 28, originally entered the NFL as an undrafted free agent out of West Virginia in 2013. After spending three years with the Steelers, Garvin has played for the Redskins and Seahawks over the past two seasons. Primarily a special teams maven, Garvin saw the most defensive playtime (18%) of his career in 2017, as injuries forced him into starting duty with Seattle. Garvin managed nine tackles, one sack, and one forced fumble in 15 games (three starts) for the Seahawks.

Miami, for its part, is currently projected to start Kiko Alonso and 2017 second-round pick Raekwon McMillan in nickel packages, with Stephone Anthony, Mike Hull, and Chase Allen in reserve. Garvin would likely spend most of his time with the Dolphins on special teams, where Miami last season ranked 12th in DVOA, per Football Outsiders.