The Saints are hunting for some linebacker depth. NFL.com’s Ian Rapoport reports (via Twitter) that free agent Scooby Wright worked out for the team yesterday. Meanwhile, Herbie Teope of NFL.com tweets that the Saints also auditioned linebacker Zaire Anderson. 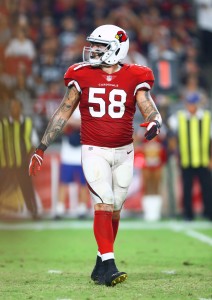 The Saints could definitely use some reinforcement at the position, as they’re currently rostering five linebackers. The grouping includes A.J. Klein, Manti Te’o, Demario Davis, Alex Anzalone, and Craig Robertson, so the could surely benefit from some additional depth.

Wright, 24, has seen the field for 13 regular season games throughout his career. The 2016 seventh-round pick has seven career tackles, and he’s had stints with the Cardinals and Browns. He was cut by Arizona in late August.

Anderson, a 2015 undrafted free agent out of Nebraska, had spent his entire career with the Broncos. The 26-year-old appeared in every regular season game over the past two years, including a 2017 campaign where he compiled 23 tackles.