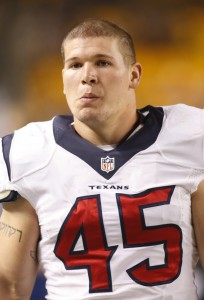 Prosch, who was entering the last year of his contract prior to the extension, has spent his entire career in Houston since the team selected the former Auburn Tiger in the sixth round of the 2014 draft. He appeared in all but one of 48 possible regular-season games during his first three years, though he hasn’t been a significant factor on offense. Thus far, the 25-year-old Prosch has started in eight games and totaled 12 touches (10 carries, two receptions).

While Prosch hasn’t made a name for himself offensively, he has been a reliable special teamer for the Texans. Prosch’s work with that unit has increased each season, as his ST snaps went from 109 to 208 to 220 during his first three years in the league. Prosch saw the fifth-most action of any of Houston’s special teamers in 2016, though Football Outsiders ranked its ST unit as the NFL’s second worst.

There have been a flood of draft signings so far today, and you can get caught up on the earlier ones with our previous roundups. We’ll be keeping track of signings from rounds 3-7 in these posts while dedicating individual posts to players taken in the top two rounds. The latest signings..