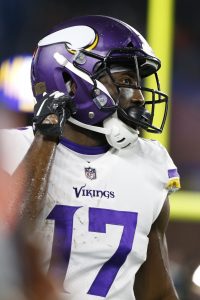 George Iloka has been relatively busy as a free agent, but it sounds like he won’t be returning to Minnesota. Darren Wolfson of 5 Eyewitness News in Minnesota reports (via Twitter) that while the two sides met at the combine, it’s unlikely the safety returns to the Vikings.

Iloka has met with the Cowboys and Raiders this offseason, with his ability to play both free and strong safety making him a commodity. David Moore of the Dallas Morning News writes that the 28-year-old ultimately left Dallas without a deal, and we can assume the same about his previous visit with Oakland.

Iloka was a starter for the bulk of his career with the Bengals, but played mostly in a reserve role for the Vikings last year. In 16 games (three starts), the defensive back compiled 16 tackles and one forced fumble. However, he’s only one year removed from an 80-tackle campaign.

Wolfson also notes that the Vikings have not extended an offer to free agent wideout Aldrick Robinson, and the team is looking for other options at receiver. Robinson finished last season with 17 receptions for 231 yards and five scores.

Aldrick Robinson couldn’t quite make the 49ers’ 53-man roster out of camp but will have another opportunity.

Although the Vikings were the only known team to work out Robinson, the Patriots and Bills also explored adding him as well, Darren Wolfson of 5 Eyewitness News tweets.

Set to turn 30 next week, Robinson will be the oldest Vikings wideout. Minnesota rosters third-year man Laquon Treadwell, second-season cog Stacy Coley and rookie Brandon Zylstra behind its starters. If the Vikings aren’t keen on carrying six wideouts, one of the latter duo could be on the chopping block.

Robinson worked out for the Vikings prior to Week 1, and it apparently went well enough the team had him in its wait-and-see queue. The former sixth-round Redskins pick has twice averaged more than 20 yards per catch, with the 2012 and ’13 Redskins, and has followed Kyle Shanahan to three cities — trekking to Atlanta and then San Francisco. With the 2017 49ers, Robinson caught 19 passes for 260 yards and two touchdowns.

Treadwell’s four receptions represent the only passes a Vikings receiver not named Stefon Diggs or Adam Thielen has caught this season.

A player who’s been with Kyle Shanahan in three cities will not be making the 49ers’ 53-man roster.

The 49ers will release Aldrick Robinson on Friday, Matt Maiocco of NBC Sports Bay Area reports (on Twitter). Robinson played for Shanahan in Washington and Atlanta before trekking to San Francisco last year.

Two rookie wideouts headed to San Francisco after 2018 draft picks, with the arrivals of second-rounder Dante Pettis and seventh-rounder Richie James potentially having an impact on the 29-year-old Robinson’s roster status. The 49ers didn’t add any veteran UFAs this year but return their top three in Pierre Garcon, Marquise Goodwin and Trent Taylor.

Robinson caught 19 passes for 260 yards last season. He’s served mostly as a backup in his seven-year career, which began as a 2011 Redskins sixth-round selection. 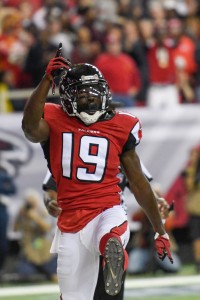