Colts To Work Out De’Angelo Henderson

The Colts will work out running back De’Angelo Henderson on Monday, Ian Rapoport of NFL.com tweets. Henderson remains a free agent after missing the Vikings’ cut over Labor Day weekend.

Henderson was a Broncos sixth-round draft choice in 2017 and spent last year with the Jets. All in all, he has eight career appearances across two seasons and a grand total of nine carries.

There was a lot of talk about Marlon Mack not being able to mesh with Jacoby Brissett as the Colts’ starter, but he was stellar on Sunday. It goes without saying – after Mack’s career day, the Colts are looking at Henderson as a potential supplement for Mack, not a replacement. 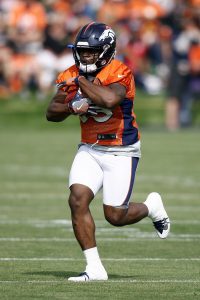 The Jets have released running back De’Angelo Henderson. The former Broncos sixth-rounder was on the Jets’ active roster last season, but appeared in only three games.

Henderson, 26, appeared in a handful of games as a rookie for Denver, despite some training camp hype and hope about his potential role. He joined the Jets’ practice squad after missing Denver’s final cut in 2018 and earned a promotion to the main roster after Bilal Powell was lost for the year.

The running back had a standout collegiate career at Coastal Carolina University, rushing for a touchdown in 35 consecutive games (an NCCA Division I record). In the NFL, he has a total of nine carries for 32 yards.