Dieter spent his five NFL seasons with the Chiefs. He didn’t make much of an impact from a statistical standpoint; in 10 regular season games, the receiver hauled in a pair of catches for 32 yards (plus another catch in the postseason). However, he became a popular player on the practice field, including his friendship with quarterback Patrick Mahomes. 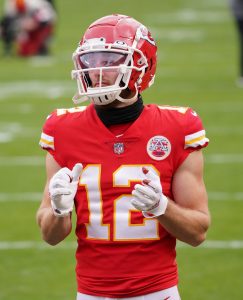