In a move foreshadowed earlier in the week, the Saints have brought back a key member of their offensive line. The team announced on Saturday that center Erik McCoy has been activated from IR. 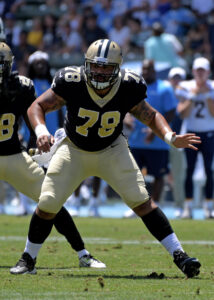 The 25-year-old was designated for return on Wednesday, opening his 21-day activation window. He had missed the past four games, as required by injured reserve rules, but a return to action along this timeline is encouraging for his health outlook down the stretch. The same holds true of linebacker Chase Hansen, who has played exclusively on special teams to date.

With McCoy back in the fold, New Orleans will once again have their full-time starter in the middle of their o-line. McCoy played every snap of the 2022 season before going down in Week 9 with a calf injury. He dealt with a similar issue the year before, which caused him to miss games for the first time in his four-year career. The former second-rounder graded out in the top-five amongst all centers as a rookie, earning a 78.0 rating from PFF. 2022 has, however, continued his emerging trend of grades in the mid-60s, which have placed him mid-pack at the position.

The move will allow Cesar Ruiz to return to his usual right guard spot. That should help the team’s offensive front in their attempts to improve on the ground during their late-season playoff push. The Saints rank 21st in rushing yards per game with 110, and sit 28th with an average time of possession of 29 minutes. Improvement in those areas could spark a December turnaround and keep the team in contention for the NFC South title.

In a corresponding roster move, New Orleans placed linebacker Zack Baun on IR. The 2020 third-rounder has, similarly to Hansen, been used on special teams far more than defense. The former will now miss the remainder of the regular season after being sidelined for just one contest over the course of his first two years in the league. Hansen will likely re-take a significant third phase role in his absence, beginning on Sunday for New Orleans’ divisional contest against the Falcons.

As we enter the final stretch of the regular season, New Orleans is making preparations, designating center Erik McCoy and linebacker Chase Hansen for return off injured reserve, according to Field Yates of ESPN. Both players have sat out of the team’s last four games, the minimum amount required to return form IR.

McCoy was placed on IR after leaving New Orleans’ Monday night loss to the Ravens in early-November. The team’s fourth-year starting center left the game with a calf injury and sat out the next five weeks, mirroring his absence from the year before due to similar calf issues. Usual starting right guard Cesar Ruiz, who has center experience from his time as a Wolverine, has been filling in for McCoy with backup lineman Calvin Throckmorton filling Ruiz’s spot at guard. Veteran interior lineman Josh Andrews has also helped to fill out the two positions, starting three of the four games McCoy has missed.

Hansen’s return will add a bit of depth at the linebacker position. The third-year player out of Utah had been a mainstay on the special teams units this season before finding his way to IR.

The team also has officially placed veteran running back Mark Ingram on IR following the slight MCL tear suffered in the team’s more recent Monday night loss to the Buccaneers. The injury to the team’s backup running back has forced New Orleans to make some moves, the first of which being the promotion of practice squad running back David Johnson to the 53-man roster.

The second move made to counter the absence of Ingram is today’s waiver claim of former Texans and Cardinals running back Eno Benjamin, confirmed by ESPN’s Adam Schefter. Benjamin was released by Arizona a few weeks after a three-week starting run that included a 113-yard, touchdown-scoring performance. He quickly was picked up by the Texans who gave him two weeks to adjust to his new settings before playing him sparingly each of the past two weeks. He received his first carries as a Texan last weekend against the Cowboys before getting waived for the second time this season.

Benjamin was starting to show some production as a backup running back in his second year of NFL play, earning 299 yards off 70 carries before getting waived from the Cardinals. Combining Benjamin with Johnson should provide New Orleans with some solid, fresh legs behind starter Alvin Kamara.