The Saints will give Forrest Lamp another opportunity. Although the former second-round pick played just one game with the team last season, he committed to another New Orleans deal Thursday, Mike Garafolo of NFL.com tweets.

A Chargers draft choice in 2017, Lamp has seen injuries largely define his career. He missed all of his would-be rookie season in 2017, suffering a torn ACL during training camp, and went down with a season-ending malady midway through the 2019 season. The Bills placed Lamp on IR during the preseason slate last year, leading him to the Saints.

New Orleans returns its starting interior offensive line — Andrus Peat, Cesar Ruiz, Erik McCoy — and has swingman James Hurst still rostered. Lamp figures to compete for a depth role with the Saints, who allowed longtime left tackle Terron Armstead to join the Dolphins, creating a key question for what has been one of the league’s most stable O-lines.

Lamp, 28, established some momentum by starting all 16 games for the 2020 Chargers, but it did not lead to a key 2021 role. The Western Kentucky alum will nevertheless have another chance to contribute. 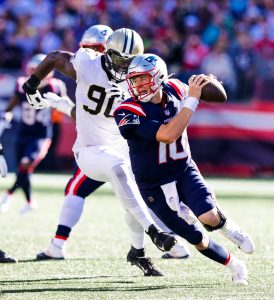 Free agent guard Forrest Lamp has agreed to join the Saints’ practice squad (Twitter link via NFL.com’s Ian Rapoport). The former second-round pick will be in the same group as veteran running back Lamar Miller, who agreed to join the 16-man unit earlier today.

Injuries have dogged Lamp for most of his pro career. He missed all of his 2017 rookie season with an ACL tear, and he missed the second half of the 2019 season due to a broken ankle. Overall, the former higher-end offensive line prospect has been limited to 25 games as a pro. On the plus side, he turned in a full 16-game slate for the Chargers last year and started in every contest.

The 27-year-old was set to play for the Bills this year, but a calf injury ultimately cost him his job. Now healthy, Lamp will try to earn his way onto the Saints’ 53-man roster.

The Bills have signed guard Forrest Lamp to a one-year deal, per a club announcement. Financial terms of the deal were not disclosed, but it’s likely for something near the veteran’s minimum.

The Chargers selected Lamp in the second round of the 2017 draft to solidify their offensive line. Considered one of the safest offensive line prospects in the draft, the Western Kentucky product has yet to live up to that billing. Lamp’s first season was spiked by a torn ACL. After a knee procedure in 2018 and a broken ankle in 2019, Lamp suited up for just nine total games in his first three years under contract.

Injuries have kept him on the sidelines for much of his career, but he bounced back last year to play on 100% of his snaps last year. With the Bills, he has a chance to prove that the injury bug is behind him.

Chargers starting guard Forrest Lamp suffered a broken ankle and will miss the remainder of the season, according to Ian Rapoport of NFL.com. Lamp’s injury marks another hit to an already depleted offensive line.

Lamp was expected to play a depth role this season, but after a season-ending injury to Mike Pouncey, the Chargers opted to shift starting guard Dan Feeney to center and to start Lamp at left guard. On Sunday, in his second start, Lamp went down and had to be carted off the field after he broke his ankle. The team decided to shift Feeney back to left guard and brought Scott Quessenberry off the bench to play center for the remainder of their 23-20 loss to the Titans.

Los Angeles selected Lamp in the second round out of Western Kentucky in 2017 to solidify its offensive line. Considered one of the safest offensive line prospects in the draft, he has yet to live up to that billing.

Lamp’s first season failed to get underway before he tore his ACL and missed the entirety of the year. After another knee procedure in 2018, he entered his second season as a backup. While Lamp remained healthy for the entirety of last season, he only appeared in two games, listed as a healthy scratch in the other 14.

On the heels of a 12-4 season, the Chargers were a popular pick to push the Chiefs in the AFC West. However, a host of injuries and close losses have piled up, leaving the team with a 2-5 record. Just along their offensive line, the Bolts have lost Pouncey and Lamp and have yet to see Russell Okung make his 2019 debut.