The Eagles announced that they’ve officially signed sixth-round safety JaCoby Stevens. Per the terms of his slot, the former LSU safety will earn $3.6MM on his four-year deal. 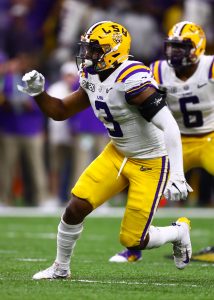 Stevens was a three-year starter for the Tigers, helping the program capture the 2019 National Championship. In total, Stevens notched 190 tackles, 21.5 tackles for loss, 9.5 sacks, and four interceptions across 42 games. Stevens struggled at times in his final year on campus, but scouts say he has the potential to play multiple positions in the secondary with occasional cameos at linebacker. He certainly has the size and athleticism to pull it off — the 6’1″ prospect weighs in at ~215 pounds and notched a 42” vertical jump at LSU’s pro day.

No matter where the Eagles slot him, Stevens says he’s ready to perform and outplay his No. 224 overall slot.

“I know that’s one of the things people are questioning because I’m playing linebacker here for the Eagles and I played safety at LSU,” said Stevens last month. “And that’s one thing that I said, I basically played linebacker at LSU as well. It’s just a position title.”

With Stevens signed, the Eagles have the majority of their draft class wrapped up. At the time of this writing, econd-round center Landon Dickerson stands as the last straggler.