Chiefs defensive tackle Khalen Saunders is expected to miss roughly four weeks of action with a dislocated elbow, according to Ian Rapoport of NFL.com (on Twitter). It’s not immediately clear whether the Chiefs will place Saunders on injured reserve, which only requires players to sit out for three weeks under the modified rules. 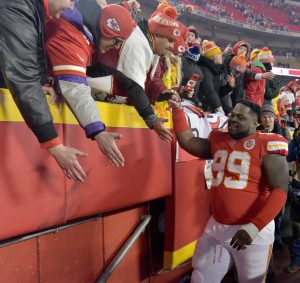 Saunders, who was forced out of the season opener early, will not require surgery. That’s good news for the Chiefs, who are counting on the former third-round pick to disrupt from the interior. With uncommon athleticism for a 325-pound lineman, Saunders has found a regular role in the rotation.

Last year, the 24-year-old stepped up for the Chiefs and stepped into the starting lineup while Chris Jones was sidelined with an injury. In 12 games (four starts), Saunders notched 22 tackles, two QB hits, and notched his first ever sack against the Packers.

The Chiefs, sans Saunders, will face the Chargers in L.A. on Sunday. To fill the void, the Chiefs may look to promote defensive tackle Braxton Hoyett from the practice squad.

The Chiefs signed third-round defensive tackle Khalen Saunders on Monday, according to Field Yates of ESPN.com (on Twitter). With that, the Chiefs have wrapped up their entire draft class. 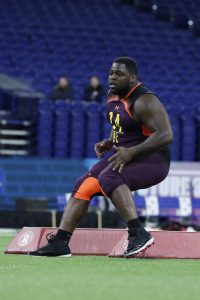 Saunders is slated to back up Chris Jones and Derrick Nnadi on the interior line in 2019. For now, he’ll practice with the first-stringers while Chris Jones stays away from the club in an effort to land a new contract.

The Western Illinois product impressed in his final year on campus with 42 tackles and 4.5 sacks from the interior. Saunders boasts impressive agility for a 324-pound lineman and could have a bright future if he’s able to improve his conditioning.

Here’s the full rundown of the Chiefs’ 2019 draft class, via PFR’s tracker: