Five years ago today, the Bears lost star offensive lineman Kyle Long for the year with a severe right ankle injury. Unfortunately, his health troubles did not end with the 2016 season. 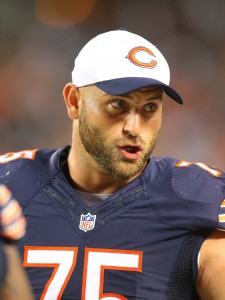 Long’s right ankle injury capped his season after just eight games. But, before that, he performed as one of the best offensive linemen in the game. Long made three straight Pro Bowls in his first three seasons, seeing time at both guard and tackle. And, in all three years, Pro Football Focus had him ranked top five at his position.

“It seems like we’ve got somebody freaking hurt every game,” left guard Josh Sitton said after the ’16 injury. “It sucks watching him down there on the ground. It’s tough to see one of your friends, one of your teammates and a helluva competitor, he was down there and he was in a lot of pain. It was tough to see.”

Long missed only one regular season game from 2013-2015. But, from 2016 through 2019, he made just 30 appearances out of a possible 64. It wasn’t just the ankle — there was a labrum tear in his left shoulder, triceps strains, painful hip injuries, and other maladies. After he was shut down in ’19, we didn’t hear much about Long in the early part of 2020. Then, there were summer rumblings of a return.

“Full transparency I miss football, but at what cost? [Still,] I’m most likely gonna be on golf courses instead of gridirons,” Long tweeted, before adding. “I didn’t retire, I got fired.”

The Chiefs hired/signed Long this past March, but a June knee injury kept him from joining the Week 1 roster. Now, for the good news – the Chiefs designated Long for return last week. Now, just before his 33rd birthday, Long could be on the verge of completing his comeback.

4:25pm: Andy Reid said Thursday afternoon Long might need surgery on his latest injury. That said, Reid does not think the veteran blocker sustained ligament damage, per Sam McDowell of the Kansas City Star (Twitter links). This update makes Long’s setback sound a bit more serious, but avoiding ligament damage would be key for his chances at being ready for his new team by Week 1.

9:44am: Chiefs guard Kyle Long suffered a lower leg injury that could keep him out of training camp (Twitter link via NFL.com’s Tom Pelissero and Ian Rapoport). Fortunately, it doesn’t appear to be too serious. There’s a chance that Long could be ready by Week 1, even if he’s forced to sit out much of training camp and the preseason.

Long joined the defending AFC champs on a one-year deal worth up to $5MM in March. Previous to that, the 2013 first-round pick spent his entire seven-year career with the Bears, earning three Pro Bowl appearances and a second-team All-Pro nod in 2014. However, he dealt with a long list of injuries between 2016 and 2019, averaging only 7.5 games per season over that four-year span. After being limited to only four games in 2019, Long announced his retirement last offseason. The Bears subsequently declined his option.

Kyle Long‘s comeback tour will see him joining the defending AFC champs. ESPN’s Adam Schefter reports (via Twitter) that the veteran offensive lineman is signing with the Chiefs. Long is signing a one-year deal worth up to $5MM.

The 2013 first-round pick had spent his entire seven-year career with the Bears, earning three Pro Bowl appearances and a second-team All-Pro nod in 2014. However, the offensive guard dealt with a long list of injuries between 2016 and 2019, averaging only 7.5 games per season over that four-year span. After being limited to only four games in 2019, Long announced his retirement last offseason. The Bears subsequently declined his option.

We learned earlier this month that the 32-year-old was eyeing a return to the NFL. If he can stay healthy, Long has a good chance of contributing with his new squad. The Chiefs have made revamping Patrick Mahomes‘ offensive line a priority this offseason, and they proved that by giving Joe Thuney a hulking five-year contract. The team was also mentioned as a potential suitor for Trent Williams before he re-signed with the 49ers.

The Raiders were also a suitor for Long’s services, a logical landing spot considering the player’s father, Hall of Fame defensive end Howie Long, played his entire 13-year career with the Raiders. However, Vic Tafur of The Athletic tweets that Long’s visit with the organization didn’t necessarily go as planned. Some sources told the reporter that Long’s workout “didn’t go that well,” while others told Tafur that the free agent was “freaked out” by the organization’s decision to dump center Rodney Hudson.

We heard recently that Kyle Long was planning on playing in 2021, and now we know he’s serious about it. The recently un-retired offensive lineman will visit the Raiders and then Chiefs this week, a source told Adam Schefter of ESPN.com (Twitter link).

Schefter reports that Long will be in Las Vegas on Monday before heading to Kansas City. As he points out Long’s father, Hall of Fame defensive end Howie Long, played his entire 13-year career with the Raiders, so this would be a cool continuation of a family legacy. Long retired in January of 2020, but one season away from the game was enough to satisfy his body.

Drafted 20th overall by the Bears in 2013, Long made the Pro Bowl in each of his first three seasons before injuries quickly derailed his career. Over the past four seasons he never appeared in more than 10 games for Chicago, and played only four most recently in 2019.

Now apparently fully healthy, he’s ready to get back on the gridiron, and both of these teams make sense as potential suitors. The Raiders just traded tackle Trent Brown, and cut guards Richie Incognito and Gabe Jackson in the past couple weeks, although Incognito may return on a cheaper deal. The Chiefs have made revamping Patrick Mahomes‘ offensive line a priority this offseason, and they’ve already cut both of their starting tackles and are expected to let their starting center walk.

Long has mostly played guard in the NFL, but did make the Pro Bowl while filling in as the Bears’ right tackle in 2015. It sounds like he could have numerous options to choose from during his first taste of free agency.

On a busy day full of trades and franchise tag news, we’ve also got a player coming out of retirement. Offensive lineman Kyle Long is planning on returning to the NFL and has signed with an agent, his brother Chris Long confirmed on Twitter.

Long retired from the league in January of 2020, then admitted in July that he missed the game, but ultimately sat out the season. That one season away was apparently enough for him to feel re-fueled. The 20th pick of the 2013 draft, Long spent each of his seven seasons in the NFL with the Bears. He had immediate success, starting at least 15 games in each of his first three seasons and making the Pro Bowl in all of those years.

Injuries soon caused things to unravel, and over the following four seasons he never appeared in more than ten games. Still only 32 and capable of playing at a high level, Long should have no problem finding a home assuming he’s healthy. Hopefully the year off was enough to get his body right.

He’s mostly played guard, but also started 16 games and made the Pro Bowl at right tackle in 2015.