Edwards-Helaire has been battling a shoulder injury that kept him out of practice all week. The RB was knocked out of last weekend’s win over the Steelers, but subsequent X-rays were negative.

The former first-round pick has already missed five games this season, and while he’s started each of his 10 games, he’s pretty much splitting playing time with Darrel Williams at this point. Williams will likely get the starting nod tomorrow, with Derrick Gore likely serving as the number-two back.

McKinnon should also be on the roster for tomorrow’s game. The veteran signed with the Chiefs this past offseason, and he saw time in 11 games before landing on IR in late November, collecting 119 yards from scrimmage on 17 touches. The veteran also saw plenty of playing time on special teams. A hamstring injury sidelined McKinnon for all of December, but he returned to Chiefs practice earlier this week.

Despite injuries marring his 49ers tenure, Jerick McKinnon will receive another opportunity. The Chiefs are signing the veteran running back, Peter Schrager of NFL.com tweets.

McKinnon, 28, spent the past three seasons with the 49ers but only played in one of them. Knee injuries sidelined the former Vikings draftee throughout the 2018 and ’19 seasons. However, McKinnon played in all 16 49ers games last season — albeit in a limited role.

He will join a Chiefs backfield headlined by 2020 first-round pick Clyde Edwards-Helaire. The Chiefs signed Le’Veon Bell midway through last season; Bell remains a free agent. The Chiefs also released Damien Williams, their 2019 starter who opted out in 2020. Multiyear Chiefs backups Darrel Williams and Darwin Thompson remain under contract, however.

Amid a slew of injuries to strike the 49ers backfield, McKinnon totaled 572 scrimmage yards and six touchdowns in 16 games. He was the only one of San Francisco’s top five halfbacks to play all 16 contests, though the team gave him only 114 touches.

McKinnon totaled 991 yards from scrimmage in his final Vikings season, leading the 49ers to give him top-five (at the time) running back money in March 2018. But knee injuries forced the team to redo McKinnon’s deal last year. The former college quarterback will now move on.

After not seeing a snap of regular season action in either of his first two years with the 49ers, running back Jerick McKinnon was rumored as a potential cap casualty a few months ago. But in March, he agreed to a pay cut to stay with the club, and now that San Francisco has traded Matt Breida to the Dolphins, McKinnon once again has a good opportunity to be a major contributor in the Niners’ offense. 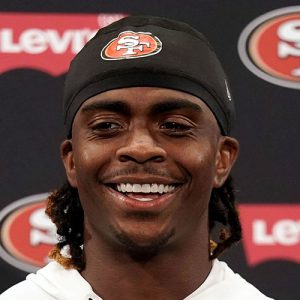 It appears as if 2019 breakout performer Raheem Mostert will head up the team’s RB depth chart, with Tevin Coleman and Jeff Wilson also in the mix. But McKinnon’s abilities as a receiver out of the backfield and his precise route-running — which prompted head coach Kyle Shanahan to push for him in the 2018 offseason — would be a welcome addition to the 49ers’ attack, and the team is cautiously optimistic that he can finally make an impact.

“We’re pulling for Jerick and it would be huge for us because we had a clear vision of what he could bring to us,” GM John Lynch recently said on the 49ers Insider Podcast (via Matt Maiocco of NBC Sports Bay Area). “We thought he’d be excellent in terms of (being a receiver) — really, a tough guy to match up with in space. And our (coaches) are really good about putting our guys in space. So that would be tremendous for us.”

McKinnon tore his ACL prior to the 2018 season, and Maiocco says McKinnon was shelved for the 2019 campaign because the ACL graft did not fill back in as hoped. Instead, “Jet” needed to go under the knife again to pack the ACL graft with bone marrow from his hip.

The 28-year-old is reportedly making good progress in his recovery, but Lynch is tempering his expectations for the time being.

“I think there’s always that critical last juncture of a rehab where you go from running straight ahead and even trying to simulate some of the cutting that goes on at (running back), specifically,” Lynch said. “Then, you go play football and it becomes much more reactive. And that’s where he struggled. He’s continued to put in work. There are some positive signs that we’re on a better track.”

Of course, no one knows if training camp will unfold as normal this year, so we may not be able to accurately gauge McKinnon’s status until closer to September. But if he can perform anywhere close to the level the 49ers were hoping for when they signed him to a lucrative free agent deal, the defending NFC champs will be that much harder to beat.

The 49ers and running back Jerick McKinnon agreed to restructure his contract, a source tells Matt Maiocco of NBC Sports Bay Area. McKinnon had been seen as a likely cap casualty. Instead, he will stay in San Francisco.

McKinnon is now signed through 2020, with Adam Caplan of Sirius XM Radio noting (via Twitter) the running back agreed to trim a year off his contract. The ex-Viking agreed to slash a lofty salary down to the veteran minimum, per Caplan, who adds that does not include the per-game roster bonuses the veteran would be in line to receive (Twitter link).

McKinnon will earn $910K in base salary and, thanks to a $4MM prorated signing bonus, count for $2.91MM against the 49ers’ 2020 cap, according to OverTheCap.

The Niners organization has long hoped to see what McKinnon could do in head coach Kyle Shanahan‘s offense. Shanahan and general manager John Lynch targetted McKinnon in the 2018 offseason, signing the versatile back to a four-year, $30MM contract. However, two seasons later, McKinnon has yet to take the field in a regular-season game for the 49ers.

After suffering a torn-ACL during practice prior to the 2018 season, another knee surgery cost McKinnon the 2019 season as well. When we last saw McKinnon in regular-season action, McKinnon was working as a scatback for the Vikings contributing off of handoffs and catching passes out of the backfield. In his final season in Minnesota, McKinnon received 201 touches (150 carries and 51 receptions) for 991 yards from scrimmage (570 rushing and 421 receiving) and 5 touchdowns (3 rushing and 2 receiving).

Under his original agreement, McKinnon was set to count $8.55MM against the salary cap in 2020 and San Francisco could have saved $4.55MM in cap space from releasing him (per Over the Cap). With Matt Breida entering free agency and Tevin Coleman remaining a possible cap casualty, keeping McKinnon in the fold at a lower number gives the Niners some added financial flexibility.

49ers general manager John Lynch told reporters that the front office will meet with Jerick McKinnon’s agent this week to discuss the running back’s contract (via The Athletic’s Matt Barrows).

The two sides will be working towards some type of restructuring, but it sounds like McKinnon may have a bit of leverage. While the veteran is set to count $8.55MM against the cap next season, the team would be left with $4MM in dead money if they chose to cut him. In that case, it makes sense for the 49ers to retain the running back, although the organization will surely be seeking some monetary savings. For what it’s worth, the former third-rounder previously said he wants to stick with the 49ers.

McKinnon inked a four-year, $30MM deal with the 49ers back in 2018, but he’s yet to see the field for a regular season game with San Francisco. The 27-year-old tore his ACL prior to the 2018 campaign, and a setback shelved him for the 2019 season.

“We’d like nothing more than to see him actually on the field,” Lynch said. “It’s no fault of Jerick’s. It’s just the way it’s been. And I can tell you we admire the way he’s worked through the various issues that he’s had.”

If McKinnon does return next season, he’ll be joining a crowded depth chart. Raheem Mostert and Tevin Coleman are both under contract, while Matt Breida (restricted free agent) and Jeff Wilson (exclusive rights free agent) could be retained.

The 49ers haven’t exactly gotten a return on their investment when it comes to RB Jerick McKinnon. The club gave the former Viking a four-year, $30MM contract in March 2018, but a torn ACL cost him all of the 2018 season, and a separate knee ailment kept off the field for the entirety of the 2019 campaign, so he may never play a single snap for San Francisco.

However, we heard in December that the Niners are open to bringing the 27-year-old back in 2020, provided that he accepts a pay cut. He is due a $6.5MM salary next year, but the club could save $4.5MM against the cap by releasing him, and given the depth of its RB corps and the need to extend star players, a release would be quite tempting.

McKinnon fully appreciates the reality of his situation and is willing to work with the 49ers if it means he gets to return to the Bay Area next season. “I’m willing to do whatever,” McKinnon said (Twitter link via Nick Wagoner of ESPN.com). “The organization knows I want to be a part of this team, so when that time comes there will be a talk between both parties.”

McKinnon also said that the Niners have not yet informed him of their plans for him, but that will probably happen soon. Fellow RB Raheem Mostert was a revelation in 2019, racking up 5.6 yards per carry and eight TDs in the regular season, and he was even better in the playoffs. Restricted free agent Matt Breida was pretty effective as well, and the club will likely retain him via a multiyear pact or an RFA tender.

Tevin Coleman was decent in his first year with San Francisco, but the team could part ways with him and save $4.55MM against the cap while absorbing no dead money. Speculatively, if the 49ers feel good enough about McKinnon’s health, they could cut Coleman and return McKinnon — who is easily the best pass catcher of the bunch and who would therefore offer a nice complement to Mostert and Breida — at a reduced rate.

The latest on the 49ers, from Matt Maiocco of NBC Sports: