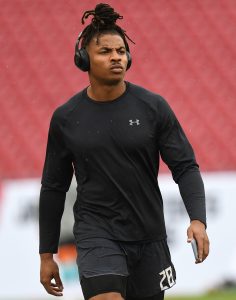 Hargreaves inked an extension with the Texans last offseason and entered the 2022 campaign as a starting cornerback. The former first-round pick started five of his eight games with Houston, collecting 27 tackles and one interception. He was released in November and ended up catching on with the Bengals for their Super Bowl run, starting one of his four regular season games. Despite being inactive for the Super Bowl, Hargreaves was penalized 15 yards for taunting following an end-zone interception by teammate Jessie Bates.

Harris has seen time with five different organizations since entering the NFL in 2018. He most recently got into six games with the Chargers and 49ers last season. Johnson had stints on the Cowboys, Steelers, and Cardinals practice squads in 2021 but didn’t get into a game.

The workout isn’t necessarily an indictment on projected starters Jaylon Johnson and rookie Kyler Gordon. Instead, the team could be looking for some depth to compete with the likes of Lamar Jackson, Kindle Vildor, BoPete Keyes, and Greg Stroman for backup reps.

Coleman started 29 games for the Browns between the 2017 and 2018 seasons. He’s only seen time in 13 games since that time in stints with the Colts and Cardinals. He joined the Titans last offseason but injured his foot during the preseason, knocking him out for the season. Mauro was an on-and-off starter for the Cardinals, and after two seasons serving in a similar role with the Giants and Raiders, he returned to Arizona for the 2020 and 2021 campaign. He got into five games last season, collecting one sack.