The Browns have released Devaroe Lawrence, per a club announcement. The release of Lawrence will open up a spot for fellow defensive tackle Larry Ogunjobi, who is returning from suspension.

Cutting Lawrence wasn’t necessarily an easy call for the Browns. Prior to his release, Lawrence appeared in all eleven games for Cleveland while appearing in 30% of the team’s snaps.

Per league rules, he’ll hit the waiver wire as a post-trade deadline cut. The league’s 31 other teams will have a 24 hour window to claim him and it’s possible that he could get picked up. Lawrence would only cost the prorated portion of his $570K salary for 2019 and is slated to make just $660K next year.

Lawrence, 27, has eight tackles and one fumble recovery to his credit this year.

After the Browns quadrupled Brian Price‘s practice squad salary, it was only a matter of time before he was brought up to the varsity squad. On Thursday, the Browns did just that by moving Price to the 53-man roster (Twitter link via NFL.com’s Ian Rapoport). To make room, fellow defensive lineman Devaroe Lawrence was waived. 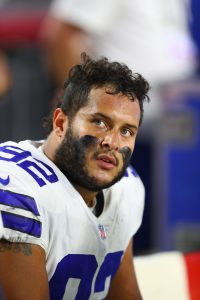 The Cowboys and Packers expressed interest in reuniting with Price recently, prompting the Browns to give him a taxi squad pay bump from $7,600 a week to $37,058 a week. That salary is roughly in line with the league minimum for rostered players, which shows how much he was valued in Cleveland.

Price went undrafted in 2016, but that was due largely to red flags, including the time he threw an official to the ground in college. If not for that incident, Price could have heard his name called early on in the draft. Last year, he appeared in eight games for the Cowboys before being placed on IR.

Rapoport notes that Lawrence has some fans around the league, so it’s possible that he will get claimed off of waivers on Friday afternoon.

If Price is on the 46-man active roster this week, he may get to make his Browns debut against the Ravens on Sunday.