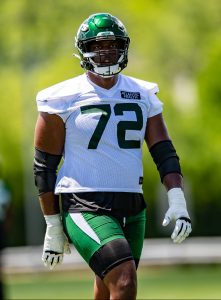 “Based on the advice of Dr. Andrew Hecht, a prominent orthopedic surgeon at Mt. Sinai Hospital in New York, Cameron will not be able to continue to play football for the New York Jets,” said agent Alan Herman.

Clark, 24, joined the Jets as a fourth-round pick in 2020. However, the University of North Carolina at Charlotte product never saw the field as his would-be rookie year was scuttled by a shoulder injury. Then, this past summer, he suffered a serious spinal cord injury. It was first believed to be contusion — now, doctors know that it’s much more serious.

“A great young man, with a bright future, I am thankful for Cameron’s peace in making his decision, however bittersweet it may be,” head coach Robert Saleh said. “He made it to the league because of his talent, hard work and attitude and I have every confidence that they will all continue to serve him as he transitions to the next step.”

The Jets have signed fourth-round offensive tackle Cameron Clark, according to Brian Costello of the New York Post (on Twitter). Per the terms of his slot, Clark will get about $4MM on his four-year deal.

The Charlotte product didn’t come with as much hype as No. 11 overall pick Mekhi Becton, but the Jets believe that he may also have a bright future as a pro. Another plus: Clark and Becton have already worked together.

“Me and Mekhi, we trained together at MJP in Dallas,” Clark said earlier this year (via the team website). “We got real close in the combine process, even at the combine, post-combine. I was definitely excited about joining him up there with the Jets. Mekhi’s a heck of a player. He’s nasty, he loves finishing blocks. I feel like both of us have that in our game. I’m excited to see what we can do.”

Clark, who stands at 6’4″ and weighs over 300 pounds, was a three-year starter in college. He’s only the third Jets draft pick to sign, so GM Joe Douglas still has some work ahead of him. Here’s the rundown, via PFR’s tracker: