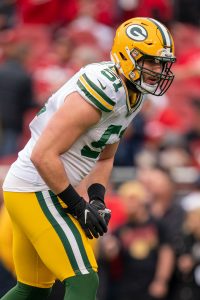 The Raiders reached an agreement to add Fackrell in March, adding the former Packers, Giants and Chargers edge on a one-year deal worth $1.19MM. The Raiders guaranteed Fackrell $633K to sign.

An injury settlement could clear a path for Fackrell to sign elsewhere, but for now, he is out of the picture for the Raiders. Las Vegas has its well-paid bookend duo — Maxx Crosby and Chandler Jones — set to start, but this roster designation leaves questions beyond the top tandem. Former No. 4 overall pick Clelin Ferrell has not worked out, to the point the fourth-year pass rusher may be on the team’s roster bubble as training camp begins.

A third-round Packers pick in 2016, Fackrell delivered an interesting 2018 season by accumulating 10.5 sacks as a part-time starter. The Giants gave him a one-year, $4.6MM deal in 2020, and he worked mostly as a starter with Big Blue. Fackrell played a rotational role with the Bolts, signing for $1.5MM. He registered seven sacks over the past two years.

Ferrell would make for an ideal No. 3 pass rusher, but he has not proven reliable as a pro. The Raiders were busy adding defensive tackles this offseason, but Fackrell represented their lone notable depth addition outside.