The Cardinals’ wide receiver situation has changed considerably this year. Trades and unavailability keep updating Kyler Murray‘s aerial personnel, but his top weapon is on his way back.

Kliff Kingsbury said Hopkins is not expected to be on a snap count. That will be good news for a scuffling Cardinals offense and a receiving chomping at the bit to resume his career. Hopkins, 30, has not played since Week 13 of last season.

This offseason brought in Marquise Brown, acquired for a package headlined by a first-round pick, but the Brown-Hopkins tandem’s crossover continues to be delayed. Hopkins’ May PED ban meant Brown would be bumped up in Arizona’s receiver hierarchy, and just as Hopkins returns, Brown will miss several weeks due to a foot fracture. The Cardinals have played without A.J. Green and Rondale Moore for stretches and lost Antoine Wesley for the season due to a quadriceps tear. Brown’s injury prompted the Cards to swing a trade for Robbie Anderson.

Arizona’s 22nd-ranked offense produced just three points against a struggling Seahawks defense; Hopkins’ availability will be critical to potential improvement. Hopkins only missed two games during his seven-season Texans tenure — a span that produced three straight first-team All-Pro nods — and caught a career-high 115 passes for 1,407 yards in a second-team All-Pro slate to start his Cardinals career. But a hamstring injury and an MCL sprain limited the star pass catcher to 11 games in 2021. That significantly affected the Cards’ offense, and another late-season swoon commenced.

Hopkins’ contract runs through 2024. His $27.25MM-per-year average made a notable impact on the receiver market this year, but the 10th-year veteran’s cap number spikes from $15.7MM in 2022 to $30.75MM in 2023. The Cards could adjust that, as no void years are presently attached to this deal, but some questions have emerged about Hopkins’ status with the team beyond this season. For now, however, it will be all systems go for Hopkins, who will team with Anderson as the 2-4 Cardinals attempt to move back on track.

OCTOBER 5: The Cardinals will be promoting Ammendola to their 53-man roster soon. Kliff Kingsbury ruled out Prater for Week 5, moving Ammendola into position to kick for a second team this season. After going to training camp with the Jets, Ammendola kicked in two Chiefs games.

OCTOBER 4: Matt Ammendola has secured the chance to make a second fill-in cameo this season. After working out for the Cardinals, the young kicker is signing with the team’s practice squad, Tom Pelissero of NFL.com tweets. 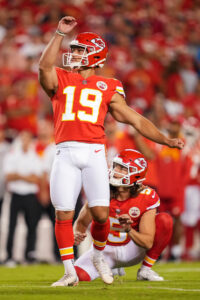 One of a few kickers to audition for the Cardinals on Monday, Ammendola will be in line to take over kicking duties for the NFC West team — in the event Matt Prater cannot go Sunday. Prater is battling a hip injury that prevented him from finishing the Cards’ Week 4 game.

This is quite familiar territory for Ammendola. After the Chiefs used a position player (Justin Reid) during part of their first game (in Arizona), they added Ammendola. That partnership crumbled after the former Jets kicker missed an extra point and a 34-yard field goal in the Chiefs’ Week 3 loss to the Colts. With Prater’s setback forcing the Cards to use a position player (Eno Benjamin) late in their win over the Panthers, they are calling on the second-year specialist.

Ammendola made every kick he attempted in the Chiefs’ Week 2 win over the Chargers but has otherwise struggled as a pro. The Oklahoma State product was just 13-for-19 on field goal tries — including an 0-for-3 mark on 50-plus-yarders — with the Jets last season, leading the team to sign Greg Zuerlein this offseason. Zuerlein beat out Ammendola in training camp.

Prater, 38, has been durable during his career. The 16th-year veteran’s last missed game due to injury came in 2010. He has been Arizona’s kicker for two seasons now, having signed with the Cardinals following a lengthy Lions stay.

Following the Chiefs’ lead, the Cardinals used a position player as their emergency kicker Sunday. Backup running back Eno Benjamin logged a kickoff for the Cardinals against the Panthers on Sunday. That arrangement, similar to the Chiefs’ usage of safety Justin Reid against the Cards in Week 1, will not persist past Week 4. With Matt Prater battling a right hip injury, the Cardinals worked out multiple kickers Monday.

Rodrigo Blankenship, Matt Ammendola — the Chiefs’ first post-Reid solution to fill in for Harrison Butker — Jose Borregales and Jonathan Garibay auditioned for the Cardinals, Aaron Wilson of ProFootballNetwork.com tweets. Blankenship, whom the Colts turned to in their first full season without Adam Vinatieri, missed much of last year with an injury and was removed from his gig after struggling in Week 1 this year. Blankenship worked out for the Jaguars last week. Ammendola lasted two games as the Chiefs’ Butker fill-in, being cut after struggling in Week 3, while Garibay was part of the Cowboys’ kicking competition. The rookie UDFA did not make it out of training camp.

Ahead of Monday’s Rams-49ers matchup, here is the latest from the NFC West:

Should Harrison Butker be unavailable for the Chiefs’ Week 4 game against the Buccaneers, Matt Ammendola will almost certainly not be the player filling in. The Chiefs released the young kicker from their practice squad Monday, Field Yates of ESPN.com tweets.

The Jets’ primary kicker in 2021, Ammendola caught on with the Chiefs to replace Butker in Week 2. While he made all five of his kicks against the Chargers (two field goals, three extra points), the Oklahoma State product struggled against the Colts. The second-year kicker missed the only extra point he tried and was 1-for-2 on field goals, with the miss coming from 34 yards out.

Kansas City elevated Ammendola from the practice squad to its active roster ahead of its Week 3 game in Indianapolis. Due to the increased P-squad flexibility the league introduced in 2020, teams can elevate two players to gameday rosters without exposing them to waivers. Ammendola reverted to the Chiefs’ P-squad Monday, but the team is not saving a spot for him at this point.

Although other blunders — including a decision to roll out an unsuccessful fake-field goal play — led to the Chiefs’ upset loss in Indianapolis, Ammendola’s were likely to lead to his exit. The 25-year-old specialist was just 13-for-19 on field goals as a Jet, leading the team to sign Greg Zuerlein. The Pro Bowler beat out Ammendola in training camp this year, but Butker’s injury — after the Chiefs used safety Justin Reid as their emergency kicker in Week 1 — led to another opportunity.

No other kickers reside on the Chiefs’ taxi squad. Workouts will likely be on tap to replace Ammendola in that role. Butker, who has been in place as Kansas City’s kicker since early in the 2017 season, entered this season having missed just one career game.

Chiefs kicker Harrison Butker is dealing with an ankle injury from the team’s season opener. He returned to the game later on, but the injury may be more serious than initially thought as Kansas City opted to add former Jets kicker Matt Ammendola to their practice squad tonight, according to NFL Network’s Tom Pelissero. 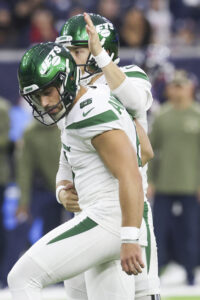 Butker slipped on the kickoff following the Kansas City’s opening scoring drive yesterday and limped off the field with a hurt ankle. The Chiefs trotted out safety Justin Reid for the next two extra point attempts, which he split one for two. After Reid’s missed extra point attempt, the Chiefs brought Butker back for field goals and extra points, but kept Reid as the kickoff specialist.

Seeing Butker’s return inspired hope that his injury was not too serious, but today’s signing hints that there might be reason to worry. Ammendola was the winner of what was a kicking contest between several free agents today, according to another tweet from Pelissero. He beat out Elliott Fry, Chase McLaughlin, Cody Parkey, Tristan Vizcaino, and rookie Cameron Dicker.

Ammendola went undrafted two years ago out of Oklahoma State. He eventually spent a few months in the offseason leading up to the 2021 season with the Panthers before signing with the Jets. He made his NFL debut in New York, playing in 11 games. Ammendola was perfect from within 40 yards, going 11 for 11, but struggled from a distance going two for eight on kicks longer than 40 yards, including missing all three kicks from over 50 yards. He was mostly reliable on extra points, though, converting 14 of his 15 attempts. He also served double-duty doing kickoffs and punts for the Jets.

It’s not a foregone conclusion that Ammendola is kicking for the Chiefs this week, but placing him on the practice squad allows the Chiefs to call him up on a day’s notice if Butker is not feeling 100-percent leading up to the team’s Thursday night matchup against the Chargers.