The Patriots released some practice photos recently and, according to Zack Cox of NESN, some of the pictures seem to indicate the much anticipated returns of several previously-injured Patriots. These players included running back James White, cornerback Jonathan Jones, tight end Dalton Keene, linebacker Raekwon McMillan, and linebacker Anfernee Jennings.

White suffered a hip injury last year that required surgery serious enough to end his season and leave him bedridden for months. He hasn’t been fully cleared to return, but seeing him active on the field bodes well for his recovery.

Jones had surgery to repair his shoulder in October and missed the remainder of the season in recovery. McMillan tore his ACL before the season started, but impressed in his limited time before the injury. Keene and Jennings were both placed on injured reserve in August and missed the entire season as a result.

Here are a few other rumors from New England:

Jets Trade No. 101 To Patriots

There were a handful of trades last night after we signed off, and one of them included two division rivals. ESPN’s Field Yates reported (via Twitter) that the Jets and Patriots made the following swap:

This was actually the second time on Friday that New England traded up to take a tight end. Earlier in the night, they acquire No. 91 from the Raiders and took UCLA’s Devin Asiasi. As many pundits have pointed out, this is the first time the Patriots have taken a pair of tight ends in one draft since selecting Rob Gronkowski and Aaron Hernandez back in 2010.

Ryan Izzo and Matt LaCosse are currently the only veteran tight ends on New England’s roster, so there’s a good chance the two rookies will see plenty of targets from Jarrett Stidham next season. 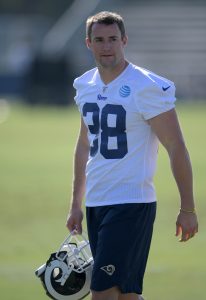