With the Colts focused on a potential postseason run, they’ll be welcoming back a member of their offense. The team announced today that they’ve activated wideout Parris Campbell from injured reserve. The team has also promoted cornerback Anthony Chesley, safety Will Redmond, and defensive tackle Chris Williams from the practice squad. 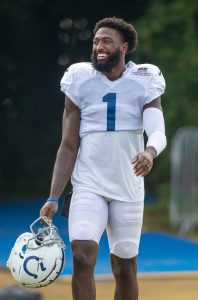 A former second-round pick, Campbell has spent most of this season rehabbing from foot surgery. The Colts’ would-be slot receiver sustained the injury in Week 6, but it looks like he could meet the rehab timetable initially provided. Before that point of the season, the 24-year-old had appeared in five games (three starts), hauling in 10 receptions for 162 yards and one touchdown.

Campbell missed nine games as a rookie and was absent for 14 last season. He suffered a knee injury in September 2020 that knocked him out of his sophomore NFL campaign. While Campbell recovered from that PCL issue this offseason, he has missed nine more games due to the foot problem. The good news is that Campbell will have a healthy offseason for the first time in a while (assuming he makes it through the rest of the year unscathed).

Redmond, 28, joined the Colts in mid-December. He’s seen time in two games for Indy, with all 22 of his snaps coming on special teams. Chesley, a former undrafted free agent out of Coastal Carolina, has seen time in eight games for the Colts this season, collecting three tackles and one fumble recovery. Williams went undrafted out of Wagner in 2020 and has spent the past two years with the Colts organization, collecting two tackles in seven games this season.

Injuries have defined Parris Campbell‘s NFL career thus far. His latest, however, may not keep him out for the rest of this season. Campbell returned to practice Thursday, Colts owner Jim Irsay tweets.

A former second-round pick, Campbell has spent most of this season rehabbing from foot surgery. The Colts’ would-be slot receiver sustained the injury in Week 6, but it looks like he could meet the rehab timetable initially provided.

Campbell missed nine games as a rookie and was absent for 14 last season. He suffered a knee injury in September 2020 that knocked him out of his sophomore NFL campaign. While Campbell recovered from that PCL issue this offseason, he has missed nine more games due to the foot problem.

Prior to his latest setback, Campbell caught a 51-yard touchdown pass in the Colts’ Week 6 win over the Texans. The Ohio State product, if healthy, would stand to be a nice auxiliary weapon for Indianapolis.

Campbell’s health history obviously makes him a luxury target for the Colts. His injuries and T.Y. Hilton‘s expiring contract will make wide receiver a need for the Colts in 2022, but they will at least be a bit deeper at the position once Campbell suits up again this season.

A Colts second-round pick in 2019, Parris Campbell has been unable to stay healthy as a pro. The young wide receiver underwent another surgery Friday (Twitter link), one that will shelve him for a while.

Campbell suffered a foot injury during the Colts’ Week 6 win over the Texans, continuing a troublesome trend for the former Ohio State standout. It is not certain if this injury — like Campbell’s knee malady sustained in Week 2 of last season — will knock him out for the year, but he is back on IR and not in Indianapolis’ aerial equation for the foreseeable future.

The Colts are not shutting Campbell down for the season just yet, with Frank Reich indicating a two- to three-month rehab effort is on tap, via CBS4’s Mike Chappell (on Twitter). A late-December return, it appears, would be the best-case scenario. Campbell having a chance to play again this season may hinge on the Colts (2-4) being in contention in the AFC South.

This is obviously familiar territory for Campbell. In addition to the serious knee injury he encountered last season, he suffered a broken foot as a rookie and dealt with a hernia issue and a broken hand that year. Campbell played in seven games as a rookie and just two in 2020. This season, he suited up for five Colts contests and topped 50 receiving yards in each of the past two. He got there with one catch in Week 6, hauling in a 51-yard TD from Carson Wentz in Indy’s 31-3 victory.

The Colts have T.Y. Hilton back and still have Zach Pascal as an auxiliary pass catcher. They join blossoming talent Michael Pittman Jr. Hilton and Pascal are free agents after this season, while Campbell is signed through 2022. Though, his injury issues will likely prompt the Colts to make a significant receiver investment in the offseason.

Parris Campbell has had a tough time in the NFL since the Colts drafted him 59th overall in 2019. The Ohio State product is blazing fast and has flashed a lot of potential during his brief time on the field, but has been unable to stay healthy. 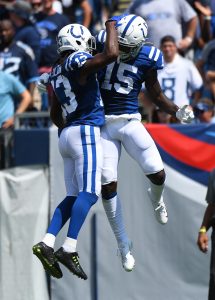 In his rookie season, he was limited to seven games due to a myriad of injuries, including a hernia, broken hand, and broken foot. This past season, he went down with a serious knee injury in Week 2 and never returned. That came on the heels of a promising Week 1 showing where he had six catches for 71 yards.

2021 is shaping up to be a make or break season for the third-year pro, and fortunately Campbell is saying he’s all systems go for the offseason. “I’m 100 percent,” Campbell said Wednesday, via Stephen Holder of The Athletic (Twitter link).

Campbell told reporters that he finally received full clearance from the medical staff this week. It wasn’t a torn ACL that sidelined him, but rather PCL and MCL injuries. Campbell also said that changing his jersey number to one was part of a hope for a fresh start.

The Colts didn’t add much at receiver this offseason and T.Y. Hilton will be 32 in November, so Campbell should have a big role if he can stay available. A healthy Campbell to go along with Hilton and second-year wideout Michael Pittman Jr. would make life a lot easier on Carson Wentz in his first year in Indy.

A little over a week ago, Michael Lombardi of The Athletic reported that the Jaguars were on the verge of a deal that would ship disgruntled defensive end Yannick Ngakoue out of Jacksonville. Jags GM Dave Caldwell refuted the report, saying no trade involving Ngakoue is imminent.

But Lombardi has doubled down and insists a trade will happen soon (subscription required). He says Ngakoue is not motivated by money right now, he is motivated by a change of scenery, so he is not worried about missing game checks. According to Lombardi, if Ngakoue is not traded, he will not report until the 10th game of the season, the deadline for him to be able to count the 2020 season as an accredited year towards free agency. And at that point, the trade deadline will be in the rear-view mirror and the Jaguars will be left with nothing but a comp pick when Ngakoue signs elsewhere.

On the other hand, Lombardi’s second report linked above was published on August 21, and nothing has materialized on the Ngakoue front since then. It is, as ever, a situation to keep an eye on.

Parris Campbell has been placed on season-ending injured reserve with a broken foot, per a club announcement. This marks an early end to the wide receiver’s underwhelming rookie campaign.

Campbell, a speedy receiver out Ohio State, broke his foot early on in Sunday’s loss to the Bucs. The second-round pick finishes out the year with just 18 receptions for 121 yards in seven games. To his credit, he continued to play against Tampa Bay even after suffering the fracture.

At 6-7, the Colts are still technically alive in the playoff picture. They’ll fight for their paper thin chances this week against the 10-3 Saints, in New Orleans.