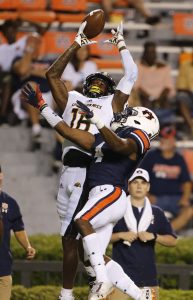 The Eagles’ need for speed continues. Towards the end of the sixth round, the Eagles selected wide receiver Quez Watkins out of Southern Miss.

On Thursday night, the Birds used the No. 21 overall pick on TCU’s Jalen Reagor, who ran the 40-yard-dash in less than 4.3 seconds. Today, they swung a deal with the 49ers for former track star Marquise Goodwin, fleet footed Boise state receiver John Hightower, and now Watkins – another speed specialist.

Watkins posted the third-fastest time at the combine in Indianpolis and some believed he could go as early as the fourth round. The Birds, at No. 210, were happy to stop his fall.

Here’s a look at the Eagles’ draft haul thus far, courtesy of the PFR tracker: