Injuries continue to bite the Titans on the defensive side of the ball. This week, the team will play without three starters as head coach Mike Vrabel has ruled out safety Amani Hooker, edge rusher Bud Dupree, and linebacker Zach Cunningham, according to Turron Davenport of ESPN.

The Titans already have six players on injured reserve from the defense alone, as well as five more from the offense. Vrabel also announced that the team will sit linebackers Olasunkanmi Adeniyi and Joseph Jones, as well. This all in addition to the recent loss of rookie wide receiver Treylon Burks to IR.

Tennessee has elevated practice squad linebacker Joe Schobert and wide receiver Dez Fitzpatrick to make up for the loss of Cunningham and Burks, respectively. Dupree and Hooker’s absences will likely mean more playing time for second-year linebacker Rashad Weaver and backup safeties Joshua Kalu and Ugo Amadi. Amadi has some starting experience from his time with the Seahawks.

Here are a few other injury updates from around the AFC, starting with a division rival of the Titans:

Treylon Burks will be sidelined for at least the next four weeks. The Titans rookie wideout has been placed on injured reserve, according to Jim Wyatt of the team’s website. 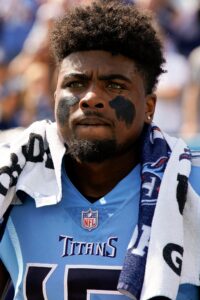 The first-round rookie was injured during the fourth quarter of last Sunday’s win over the Colts. Burks was carted off the field and was later diagnosed with a turf toe injury. He had already been ruled out for this weekend, but the team is now sidelining him through the end of the month.

Following a standout career at Arkansas that saw him earn first-team All-SEC in 2021, Burks was selected with the 18th-overall pick in this year’s draft…the selection the Titans acquired after dealing A. J. Brown to the Eagles. Burks was relatively productive in his first two games, hauling in seven of his 11 targets for 102 yards. While he saw an uptick in offensive snaps during Week 3 and Week 4, he was limited to only three catches between the two games.

Veteran receiver Robert Woods will still guide the receivers room, but the team will have to dig into their depth chart for some reinforcement. Tennessee is also rostering the likes of Nick Westbrook-Ikhine, Cody Hollister, and rookie Kyle Philips, with veteran Josh Gordon among the WRs on the Titans practice squad.

Meanwhile, the Titans have activated linebacker Monty Rice from the PUP to the active roster. The 2021 third-round pick had 30 tackles in 10 games (four starts) as a rookie, but his season ended early thanks to an ankle injury. He landed on PUP to start the 2022 campaign. The Titans also promoted receiver Dez Fitzpatrick and linebacker Joe Schobert from the practice squad.