The Titans have placed linebacker Monty Rice on injured reserve, according to a team press release. In an injury-marred year, Rice becomes the 18th player to land on the Tennessee’s IR. 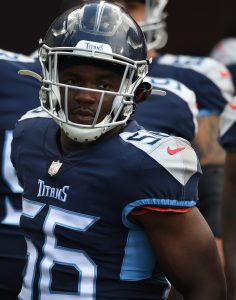 The Titans turned to Rice as their starting inside linebacker after losing Rashaan Evans and David Long to injury. Now, they’ll have to look elsewhere for support, alongside fellow fill-in Jayon Brown. That could mean an uptick in work for backups Dylan Cole and Nick Dzubnar.

It’s a disappointing setback for the rookie ‘backer, as he was starting to gain favor with head coach Mike Vrabel.

“He started by finishing [on special teams]…running his guy and taking care of the returner, so I think he started to build some confidence there. Then he made some tackles on kickoff and really started to build some confidence there. [Now,] he’s got an opportunity to play linebacker,” Vrabel said recently (via Jim Wyatt of the team website). “He is continuing to improve and hopefully we can start to really see some more progress.”

Rice, a third-round rookie, could theoretically return later this year after sitting out for at least three games. So far, the Georgia product has 36 stops on the year, plus one pass defensed and a quarterback hit.

Rice was the 92nd pick of this past draft coming out of Georgia. He earned first-team All-SEC honors in 2020 after making second-team the year before. He became a starter in his sophomore season and was a finalist for the Butkus Award this past season.

In nine 2020 games for the Bulldogs he finished with 49 tackles, four for a loss, a sack, and two forced fumbles. The Titans have Jayon Brown, Rashaan Evans, and David Long ahead of him at inside linebacker right now, so they likely won’t be counting on him to play a ton as a rookie. They did recently decline Evans’ fifth-year option, and Brown is entering a contract year as well, so Rice could be looked at as the future.

With Rice under contract, all eight of the Titans’ picks are now wrapped up: