Pass-rush depth had long been something the Steelers were reported to be seeking this offseason. Pittsburgh addressed the issue earlier this week by acquiring Malik Reed and a 2023 seventh-round pick from the Broncos in exchange for a sixth-rounder. It appears that Reed’s destination was no coincidence.

When speaking about the decision to trade the 26-year-old, Broncos GM George Paton said, via Kyle Newman of the Denver Post, “We have a lot of really talented outside backers who can rush. We thought it would be best to trade Malik and trade him to somewhere where he’s going to fit in… He wanted to go to Pittsburgh, and we found a home for him. I think it’s a win-win for both sides.”

Reed will enter his contract year slated to operate as the team’s third outside linebacker behind T.J. Watt and Alex Highsmith. With 15 sacks and an equal number of tackles for loss during his three seasons in Denver, the Nevada product should give his new team the productivity off the edge they were looking for.

Here are some other notes from the Steel City:

We’ve got another trade. The Titans have acquired offensive lineman Dennis Daley from the Panthers, according to Jim Wyatt of the Titans’ website (on Twitter). Daley and a 2024 seventh-round pick will be sent to Tennessee, with Carolina receiving a 2024 fifth-round pick.

A 2019 sixth-round selection, Daley has spent his entire three-year career with the Panthers. He started 21 of his 34 games for the organization, including a 2021 campaign where he started nine of his career-high 15 appearances. He ended up ranking 71st among 82 qualifying guards, per Pro Football Focus, although the site was much more favorable of his performance in 2020.

The 26-year-old was ultimately the odd man out in a crowded OL room. Earlier today, Ellis Williams of the Charlotte Observer wrote that Cameron Erving could actually be the Panthers lineman on the trade block, but at least for the time being, the veteran will be staying put. This is the second trade the Panthers have pulled off today after acquiring wideout Laviska Shenault from the Jaguars.

Daley’s ability to play both guard and tackle should make him a useful piece in Tennessee. The new lineman could end up squeezing one of Corey Levin, Jamarco Jones, or Jordan Roos off the roster. 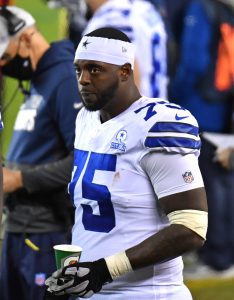 Grier is unquestionably the most interesting name on the list, as he’ll give Carolina a more reputable backup quarterback than it had in 2019. Both Taylor Heinicke and Kyle Allen failed in their respective starts in relief of Cam Newton, so Grier will attempt to to improve on that production.

There’s good reason to think Grier has a chance at NFL success. Some draft analysts considered him the second-best quarterback in the draft behind Kyler Murray, although Grier’s advanced rookie age (24) is a knock against him. The West Virginia product threw with the highest velocity at the scouting combine, and ranked second behind Murray in Josh Hermsmeyer of FiveThirtyEight.com‘s completion percentage over expected, which attempts to value a quarterbacks’s production relative to the depth of his attempted throws.