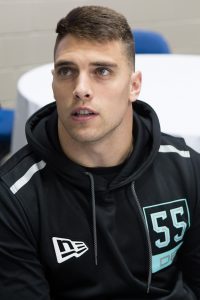 Caught in a sudden roster crunch, after the Raiders both traded for Denzel Perryman and signed K.J. Wright, Muse will receive another opportunity in Wright’s old stomping grounds. The Raiders did make an attempt to keep Muse via practice squad invite, per the Las Vegas Review-Journal’s Vincent Bonsignore (on Twitter), but the young defender opted for Seattle’s offer.

This stands to be Muse’s first healthy NFL season. He missed all of his rookie year due to a toe injury. One of a few Raiders draft picks from Clemson, Muse intercepted four passes during his senior season with the Tigers and saw regular time for the ACC powerhouse’s previous two outfits.

After playing safety at Clemson, Muse moved to linebacker this offseason. While the Raiders previously had injury-created openings for linebackers during their preseason slate, ex-Gus Bradley charges Perryman and Wright filled them. Acquired during Paul Guenther‘s defensive coordinator stay, Muse ended up being jettisoned to create roster space.

The Seahawks only kept four linebackers on their active roster, giving Muse a potential early chance to contribute as a backup. Cody Barton resides as Seattle’s fourth linebacker, behind starters Bobby Wagner, Jordyn Brooks and Darrell Taylor. Teams have until Saturday afternoon to set their active 53-man for the week.

The Raiders are waiving linebacker Tanner Muse (Twitter link via NFL.com’s Tom Pelissero). The news comes as a surprise, given that Muse was a third-round pick just last year.

Muse missed his entire rookie season with a toe injury. This summer, he’s seen reps with the first string unit while also working as a special teams player.

The Clemson product was first-team All-ACC in his final year on campus and drew league-wide attention. He registered 73 tackles, six tackles for loss, two sacks, and a team-high four interceptions in 2019, prompting the Raiders to take him No. 100 overall in 2020.

It’s worth nothing that the move has not officially hit the NFL’s transactions wire yet. Given the 6’2″, 230-pounder’s potential, it’s possible that the Raiders could find a trade for Muse before he hits the waiver wire.

In any event, this marks a clear miss for GM Mike Mayock & Co. Muse was one of three Raiders third-round picks in 2020. Now, two of those players are gone — wide receiver Lynn Bowden was shipped to the Dolphins before the start of last season for a fourth-round choice.