Now that the Cardinals have officially hired former Panthers defensive coordinator Steve Wilks as their new head coach, the club has begun to formulate its coaching staff. First, Arizona has allowed the majority of its assistants out of their contracts in order to seek employment elsewhere, tweets Ian Rapoport of NFL.com. 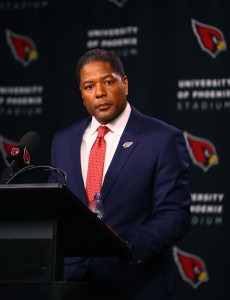 Elsewhere on their staff, the Cardinals plan to hire former Chargers defensive line coach Don Johnson for the same position, per Alex Marvez of the Sporting News, who notes Johnson worked with Wilks in San Diego. Meanwhile, the Cardinals have denied the division-rival Seahawks permission to interview assistant wide receivers coach Kevin Garver, according to Mike Jurecki of ArizonaSports.com (Twitter link).