Out of football since the Titans released him in March, Janoris Jenkins will catch on for an 11th NFL season. The 49ers added the veteran cornerback to their practice squad Monday.

A.k.a. “Jackrabbit,” the former second-round pick has bounced around since coming into the league; the 49ers are team No. 5 for the longtime starter. The 49ers will release cornerback Ka’dar Hollman from their practice squad to clear a space, KPRC2’s Aaron Wilson tweets.

Jenkins, 34, will become the league’s oldest active cornerback. He has 138 career starts and 27 interceptions on his resume. The former Rams, Giants, Saints and Titans cover man’s eight pick-sixes are tied for eighth in NFL history. His most recent defensive TD came with the Saints in 2020.

Both New Orleans and Tennessee made Jenkins a cap casualty over the past two years. The Titans gave Jenkins a two-year, $15MM deal in March 2021 and used him as a full-time player in a retooled secondary. The former Florida recruit-turned-Division II standout started 13 games and played 93% of the Titans’ defensive snaps, starting in the team’s playoff game.

While it is interesting a player with Jenkins’ accomplishments is settling for a practice squad deal, the league’s expanded P-squads during the 2020s have opened the door to many similar agreements. The 49ers lost starter Emmanuel Moseley for the season and saw Jason Verrett go down with another major injury not long after. While San Francisco’s defense (zero second-half points allowed over the past four games) is getting by fine without these veterans, Jenkins stands to provide some experience and insurance down the stretch.

New Texans GM Nick Caserio continues to wheel and deal. Houston has agreed to a trade to acquire cornerback Ka’dar Hollman from the Packers, a source told veteran NFL reporter Aaron Wilson (Twitter link). The Texans will send back a 2022 seventh-round pick via the Bears for Hollman, Field Yates of ESPN.com tweets. 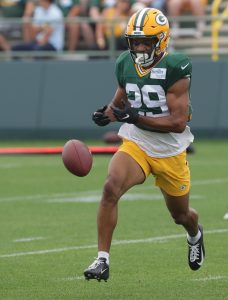 Caserio has made several trades recently, and this isn’t even his first one with Green Bay. The two teams recently worked out a deal for receiver Randall Cobb, at the behest of Aaron Rodgers. Caserio just traded corner Keion Crossen to the Giants last week, so Hollman can essentially be seen as a replacement in the secondary.

The Packers drafted Hollman in the sixth-round out of Toledo in 2019. He barely saw the field as a rookie, but took on a real role this past season. He appeared in 14 games for Green Bay, and even started one.

Hollman ended up playing a bit over 10 percent of the defensive snaps, finishing with 10 tackles and three passes defended. He was also a contributor on special teams, and is a bit on the older side for a third-year pro as he’ll turn 27 next month. Caserio is certainly being aggressive if nothing else as he continues to completely remake Houston’s roster.