Bengals nose tackle Josh Tupou will opt out of the 2020 season, sources tell Tom Pelissero of NFL.com (on Twitter). On the other side of the ball, offensive tackle Isaiah Prince has also chosen to sit out, per a club announcement.

Tupou appeared in all 16 of the Bengals’ games last year, including seven starts. This year, the Bengals were counting on him to once again serve as a key rotation piece behind defensive tackles Geno Atkins and D.J. Reader. They’re looking thin without him, especially after releasing Ryan Glasgow earlier this week. Tupou was set to earn $2.133MM in 2020. Now, that salary will be pushed into 2021 as his contract tolls.

Tupou and Prince are the first Bengals players to opt out of the season. In total, 30+ players have decided against playing, and many of those players are linemen. Given their body mass and the higher risk factor, that’s not a huge surprise. On the defensive side, Tupou joins a list that includes Eddie Goldman, Michael Pierce, Star Lotulelei, Kyle Peko, Eddie Vanderdoes, and John Atkins.

The injuries for the Bengals’ defense just keep piling up. The team placed defensive tackle Josh Tupou on injured reserve today, ending his season, the team announced via Twitter.

To take his spot on the 53-man roster, the team signed defensive tackle Niles Scott away from the Broncos’ practice squad. Tupou’s injury was a torn pec that he suffered in practice on Wednesday, according to Geoff Hobson of the Bengals.com (Twitter link). It’s the latest in a long string of defensive injuries for the Bengals, as several starters have already missed significant time this season.

Scott is a rookie undrafted free agent who has bounced around a bit. From tiny Division III school Frostburg State, Scott originally signed with the 49ers and spent training camp with San Francisco. After a sting on the 49ers’ practice squad, he wound up in Denver, where he’d been until today. It’s always cool to see a D-3 guy get a chance, and he has a realistic chance to earn some playing time on this depleted Bengals squad.

The Bengals placed wide receiver John Ross on injured reserve with a shoulder injury. This brings an end to a frustrating year for the team’s first-round pick. 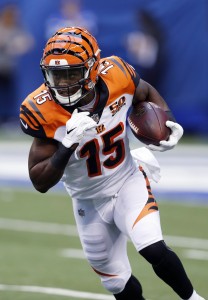 The speedy wideout appeared in only three games this year and did not catch a single pass. Injuries marred his freshman season in the pros, which is exactly what scouts feared in the spring.

Ross was lighting quick, but he had more red flags than a USSR medal ceremony. He tore his ACL and missed the 2015 collegiate campaign and also underwent labrum surgery after the combine. Clubs loved his 4.22-second 40-yard-dash time, but many viewed him as a one contract player and not as a long-term investment. Next year, he’ll work to prove those critics wrong.

At 5-7, the Bengals have less than a 2% chance of reaching the playoffs. They’ll face the Bears, Vikings, Lions, and Ravens, without their top pick in tow.

In related moves, the Bengals have promoted defensive tackle Josh Tupou from practice squad and signed linebacker Carl Bradford to the practice squad.

Pat Sims is back, and Bengals fans didn’t even get a chance to really miss him. After waiving Sims on Saturday, the Bengals are set to re-sign the defensive tackle, according to Jim Owczarski of the Cincinnati Enquirer. It is expected that defensive tackle Josh Tupou will be released to make room. 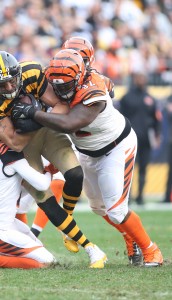 Sims was ruled out for Sunday’s game against the Broncos with a calf injury, which perhaps explains the team’s crafty move to drop him and then add him again days later. In theory, the Bengals could have lost the 31-year-old to waivers since even vested veterans go on the wire after the trading deadline, but he went unclaimed in the 24-hour window. It is believed that Sims will be ready to go against the Browns this week, Owczarski hears.

Sims has made seven starts for the Bengals this season, but it will be interesting to see how he is used upon his return. Against Denver, second-year player Andrew Billings played 52% of the defensive tackle snaps against the Broncos. Meanwhile, the advanced metrics at Pro Football Focus indicate that Sims has been among the worst interior defenders in the league.