C.J. Gardner-Johnson‘s contract isn’t expected to be an issue in Philadelphia, but it remains to be seen if the Eagles will extend the recently acquired defensive back. As Zach Berman and Bo Wulf write, while Eagles GM Howie Roseman didn’t specifically discuss Gardner-Johnson’s contract status today, he said he would “never want to rule anything out” when it comes to a potential extension. 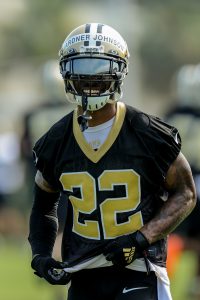 Gardner-Johnson was only available in the first place because his contract talks with the Saints hit an impasse. As Jeff Duncan of NOLA.com tweets, the player and the Saints were about $4MM apart in negotiations. New Orleans ultimately decided to prioritize other impending extensions and deal from a position of strength, leading to their trade with Philadelphia.

While the impending free agent was pushing for a deal in New Orleans, it’s still uncertain if he’ll get a new contract in Philly. As Berman and Wulf write, the Eagles have “consummated others deals contingent upon a new contract,” so it wouldn’t be shocking if a new deal suddenly materialized. On the flip side, the team also didn’t give up a significant haul (like they did for, say, A.J. Brown), so an extension wouldn’t appear to be a “necessity,” per the writers. Plus, while Gardner-Johnson was negotiating as a slot cornerback in New Orleans, he’s expected to play safety in Philadelphia, which could set him up for an even bigger pay day if he performs well at the position. As a result, the player may just prefer to just hit free agency next offseason.

With Gardner-Johnson now on the roster, the organization had to make some tough decisions at the position. The Eagles ultimately moved on from veteran Anthony Harris, who was released and later re-signed this summer. He was expected to serve as a starting safety, but with the emergence of Marcus Epps and the acquisition of Gardner-Johnson, Harris was ultimately eyeing a backup role. However, Roseman seemed to hint that a reunion could still be in order.

“We felt like since there was a possibility that his role had changed from when we had signed him, that because we were looking at options, he also deserved to kind of look at options himself,” Roseman said. “Obviously, you don’t want to close any doors on anyone or anything right now at this time.”

The Saints are trading one of their top defensive backs to the Eagles. C.J. Gardner-Johnson is heading to Philadelphia, according to Tom Pelissero and Ian Rapoport of NFL.com (on Twitter). The teams have since announced the deal.

Gardner-Johnson, who has played both safety and patrolled the slot for the Saints, staged a hold-in effort earlier in camp as he angled for an extension. Talks broke down, and the Saints are bailing on the talented defender.

It did not take too much in the way of compensation for this trade to go down. The Eagles are sending a 2023 fifth-round pick and a 2024 sixth to the Saints for Gardner-Johnson and a 2025 seventh, Pelissero tweets. The 2024 sixth will be the lower of the Eagles’ two selections in that round.

The Eagles actually see Gardner-Johnson as a safety, Pelissero tweets. He will pair with Marcus Epps, who finished a strong training camp, at the position. A report earlier this month indicated the Eagles could acquire a safety, but Gardner-Johnson has largely excelled in the slot prior to this trade.

This will make for an interesting transition for the fourth-year veteran, especially coming in a contract year. Safety, however, as the Jamal Adams, Minkah Fitzpatrick and Derwin James deals have shown, has proven to be a more lucrative position than slot corner.

Tuesday’s deal also marks the third splash trade for the Eagles this offseason; the Saints have now been involved in two of those moves. This trade comes after the move to acquire A.J. Brown and the deal to land a future first-rounder from the Saints. No word about a potential Gardner-Johnson extension has come down. The Eagles could wait here, but Jalen Hurts‘ rookie contract also offers some flexibility. The team also has no notable cash tied to the safety position, having just released Anthony Harris.

While Pro Football Focus has rated Gardner-Johnson outside the top 50 at cornerback in each of the past two years, he carved out a regular role amongst a veteran Saints DB corps. The former fourth-round pick has also become known for his ability to rile up opposition — both opponents and teammates, considering Michael Thomas‘ 2020 team-imposed suspension came after he threw a punch at Gardner-Johnson. It will be interesting to see how he fares in Philly.

The Saints have assembled a deep secondary in recent years, and NOLA.com’s Jeff Duncan tweets rookie Alontae Taylor is one of the players — along with Bradley Roby and former slot P.J. Williams — who have worked inside replacing Gardner-Johnson during camp. The team also already has a big-ticket cornerback deal (Marshon Lattimore) in a secondary that also now includes Tyrann Mathieu‘s $9MM-AAV deal.

The Saints’ defensive back equation includes two new safeties, has two recent Day 2 draftees and is anchored by perennial Pro Bowler Marshon Lattimore. But a former fourth-round pick is set to carry a substantial workload.

C.J. Gardner-Johnson is on track to reprise his role as New Orleans’ slot cornerback, a job at which he has become one of the game’s best. The fourth-year veteran is entering his contract season, and he looks to be joining the hold-in trend. Gardner-Johnson is reducing his training camp workload as he aims to secure a new deal, Nick Underhill of NewOrleans.football reports (on Twitter). This move comes after Gardner-Johnson stayed away from the Saints’ voluntary offseason workouts.

It is not clear by how much Gardner-Johnson will tamp down his practice work, but players have laid out the hold-in game plan since the 2020 CBA made holding out much more difficult. Derwin James, Diontae Johnson and Roquan Smith are staging hold-in efforts, while D.K. Metcalf and Deebo Samuel began their respective training camps doing so. Metcalf and Samuel’s efforts resulted in quick extensions. The other three players here have not been rewarded yet. In Johnson’s case, it is unclear if the team plans to do so.

Gardner-Johnson, whom Pro Football Focus rated as the NFL’s No. 5 slot corner, played 626 defensive snaps last season. A midseason foot injury led to an IR stay, but the plus defender/high-end trash talker returned to help New Orleans’ finish — one that included a Week 15 shutout win in Tampa. Gardner-Johnson’s 24 plays on the ball from the slot lead the league since 2019, when the Florida alum entered the league. He finished with a career-high three interceptions in 2021 and posted a career-best mark in passer rating allowed as the closest defender, holding quarterbacks to a collective 67.7 mark.

The Saints have some notable cash allocated to their secondary, which includes a few veteran contracts. However, only Lattimore — at $19.4MM per year — is tied to a big-ticket deal. Both Tyrann Mathieu and Bradley Roby are attached to mid-tier accords at their respective positions.

Slot corners also are not presently expensive. Gardner-Johnson’s decision follows Kenny Moore lobbying for a raise earlier this offseason. While Moore is participating fully in Colts camp, the Pro Bowl slot and Indianapolis are not close on terms. Slot players are still maxing out below the eight-figure-per-year mark. It would seem that status will change soon, with Moore’s contract year coming in 2023. But Gardner-Johnson could get there first, depending on how the Saints value his skillset.

It sounds like Andy Dalton will be back in the lineup for the Bears on Thursday night. The veteran quarterback is expected to get the start for Chicago later this week, per NFL Network’s Ian Rapoport (via Twitter).

Rookie Justin Fields is currently dealing with a rib injury, thrusting Dalton back into the starting lineup. The 34-year-old has barely seen the field since starting Chicago’s first two games. Since then, Dalton has appeared in two contests, completing 12 of his 24 pass attempts for 209 yards and two touchdowns.

Fortunately, it sounds like it’s more of a timing thing for Fields than anything else. The rookie spent the day undergoing more testing on his rib injury, but the turnaround time will ultimately keep Fields out of the lineup. Rapoport adds that the young QB has “been making major strides,” and it sounds like he’ll be back for the Bears before long. Fields has started eight of his 10 games this season, throwing four touchdowns vs. eight interceptions.

The Saints will be without one of their secondary starters for a stretch. They placed Chauncey Gardner-Johnson on IR. The young defensive back is down with a foot injury.

Although Gardner-Johnson may be known more for inducing punches from wide receivers at this point in his career, the third-year defender has been a key presence in New Orleans’ veteran-laden secondary. The former fourth-round pick has started seven games for the Saints this season, working in multiple capacities — including the slot position.

Gardner-Johnson has made 26 tackles, one sack and an interception this season. The Saints have fellow corner/safety hybrid P.J. Williams capable of manning the slot as well, and the team activated veteran Ken Crawley off injured reserve Saturday.

Crawley has been with the Saints for most of his career, beginning with the team in 2016, but has played just one game this season. In addition to his IR stay, Crawley spent two weeks on the Saints’ reserve/COVID-19 list.

New Orleans also promoted wide receiver Kevin White from its practice squad and waived defensive lineman Christian Ringo. The team also promoted offensive lineman Will Clapp ahead of its Week 10 matchup with Tennessee. The Saints are set to be without left tackle Terron Armstead against the Titans.

The Saints didn’t hold any sort of offseason program (not even a virtual session), and the club doesn’t plan to get together again until training camp. Speaking on a conference call with reporters, defensive coordinator Dennis Allen said New Orleans coaches will continue to work from home and won’t convene until training camp begins, according to Josh Alper of Pro Football Talk. The NFL is now allowing teams to have coaches inside facilities, but the Saints won’t take advantage of that league decision.